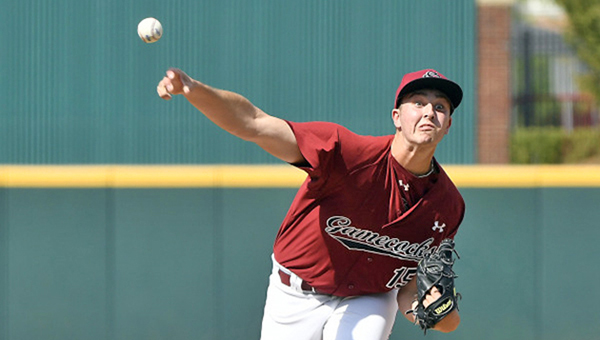 COLUMBIA, S.C. — Mississippi State left town with its first series win at South Carolina in 19 years, but a sweep was not in the cards.

Sophomore right-hander Adam Hill limited Mississippi State to one run on four hits over six innings, and South Carolina scored five times in the eighth inning to beat the Bulldogs 6-1 in Sunday’s series finale.
Mississippi State (25-13, 10-5 Southeastern Conference) had won the first two games of the series and is now 10-2 in its last four SEC weekends.

South Carolina (22-13, 8-7) has lost three consecutive SEC series, but is 4-1 in series finales within the league.

“Obviously it was a big relief for us to win this one today after how we lost the first two. Live to fight another day, keep our head above water in the SEC. I think that’s why it was a significant game,” South Carolina coach Chad Holbrook said.

Mississippi State starter Jacob Billingsley shut down the Gamecocks for the first five innings. He allowed no runs or walks, and only three hits while striking out six.

The Bulldogs’ bullpen was a lot shakier. Five relievers allowed six runs on six hits over the last four innings with the bulk of the damage coming in the eighth inning.

With the score tied 1-1, Jacob Olson led off the bottom of the eighth with a single and Carlos Cortes followed with a walk. After a sacrifice bunt and an intentional walk, Jonah Bride sliced a fly ball down the right field line that Tanner Poole caught with a sliding grab, but it was good enough to bring in Olson with the go-ahead run.
After that, the floddgates opened.

L.T. Tolbert delivered a two-run single, Matt Williams an RBI double, and Madison Stokes an RBI single to push the lead to 6-1.

South Carolina batted around in the eighth inning and scored nearly as many runs (5) as Mississippi State used pitchers (4).

Ryan Gridley went 2-for-3 with a pair of doubles for Mississippi State, including one that brought in the team’s only run in the sixth inning.

South Carolina’s Carlos Cortes hit a game-tying solo home run in the bottom of the sixth, giving him three in the last two games of the season.

Tolbert was 2-for-4 with two RBIs and a run scored, and Stokes went 3-for-4 with one RBI.

Hill, the Gamecocks’ starting pitcher, struck out seven while going the first six innings but left with a no-decision. Reliever Josh Reagan (4-1) followed with two scoreless innings to earn the victory, and closer Tyler Johnson struck out two of the three batters he faced in the ninth to finish it in a non-save situation.