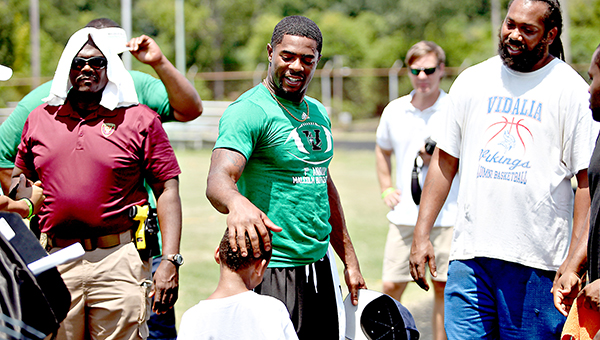 As it heads into its third year, the Malcolm Butler Football Camp is getting bigger and, its organizers hope, even better.

This year’s camp will be split into two sessions, one in the morning for high school football players and the other in the afternoon for younger players. The split will allow nearly 500 children to participate after the number was limited to about half of that in its first two editions, as well as provide two distinctly different experiences for younger and older players.

Carolyn Bingham, a member of the camp’s organizing committee and the Vicksburg High athletics booster club, said the morning session will be geared toward more intensive football drills and on-field work for children in grades 8-12.

The afternoon session, called “The Malcolm and Me” camp, is for children in grades 1-7 and will feature more personal interaction with Butler and instructors and is geared toward teaching life lessons and personal values as much as athletic instruction.

“The older boys had never gotten the chance to actually work out with Malcolm and ask him questions about football. The boys wanted a chance to interact with Malcolm on the football field and they weren’t getting to do that as much as they’d like,” Bingham said.

The camp is scheduled for Saturday, July 15 at Memorial Stadium, but registration was set to open Monday morning. In another change, registration this year is online only at malcombutlerfootballcamp.org.
The camp is free, but participation for each session is limited to approximately 250 children so early registration is encouraged.

Registration in previous years had been handled through paper forms and phone calls. Bingham said the move to an online system was made to streamline the process and make it easier for everyone.

“It’s more convenient because it’s immediate feedback. If they complete the process right, they’ll get a confirmation e-mail and the committee will too and we’ll know exactly how many people have registered,” Bingham said. “If they don’t get that e-mail, then they need to make sure they’ve filled everything out right.”

Registration will be open until May 1, or until all of the slots are full, whichever comes first. During the registration process, Bingham said parents must complete the online application form and a medical and liability release.

“If they have any health conditions that might cause a problem, we need to know about it. That form is included in the registration packet,” Bingham said.

Butler, a former Vicksburg High star, is entering his fourth season in the NFL as a cornerback with the New England Patriots. He’s already won two Super Bowls with the team and made a game-saving interception in the final seconds of their Super Bowl XLIX victory over the Seattle Seahawks that propelled him to stardom.

Butler started the camp in 2015, about five months after that first Super Bowl, and it was an instant hit. The 27-year-old has worked with Vicksburg High’s booster club and coaching staff to increase the reach and impact of the camp, and this year’s moves seem to be the next evolution in its expansion.

Bingham said several college coaches have inquired about being guest instructors at the camp, and more volunteer efforts like that could help it grow even more in the years to come.

“It’s not just big for Vicksburg High School, it’s big for the city of Vicksburg,” said VHS booster club director Cynthia Bell. “In two years we’ve gone from 250 and now we’ve bumped it up to 500. This is a big deal, and we want the kids to know (Butler) is doing what he said he’s going to do. He also wants to thank all of the sponsors who help us make this a success.”

MALCOLM BUTLER FOOTBALL CAMP
• Registration for the third annual Malcolm Butler Football Camp opens Monday, April 17 and continues through May 1.
• The camp is July 15. It is for boys in grades 1-12, and will be split into two sessions — one for grades 1-7 and the other for grades 8-12.
• The camp is free, but registration is required. Registration is available online only at
malcolmbutlerfootballcamp.org
• Participation is limited to approximately 250 children per session.
• The camp will include instruction from New England Patriots cornerback and former Vicksburg High star Malcolm Butler and the Vicksburg High School football coaching staff.
• For more information, call Cynthia Bell at 601-529-7470, Carolyn Bingham at 601-738-8102, or visit malcolmbutlerfootballcamp.org