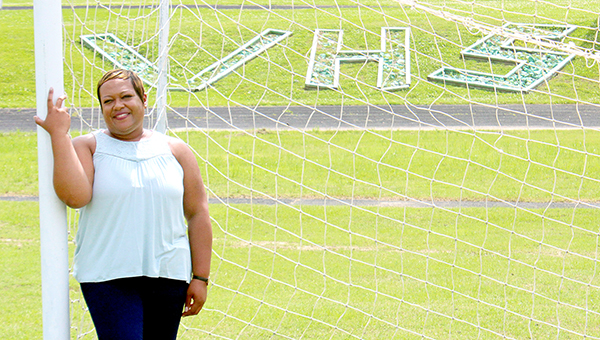 Kristin Williams coached the boys’ soccer team at Vicksburg High for the last two seasons. She coached the team to six wins this past season and helped three seniors sign soccer scholarships at William Carey in Hattiesburg. She also serves as the head cheerleading coach at the school. (Brandon O'Connor | The Vicksburg Post)

When Kristin Williams made the move from teaching at the elementary level to working at Vicksburg High School, coaching wasn’t in the plans.

Before she knew it though, she was not only the head cheerleading coach, but also put in control of the boys’ soccer team.

“I am not sure what happened, but Mr. McDonald was like ‘hey, I hear you have cheer experience,”’ Williams said. “I was a cheerleader in high school and I was an NCAA cheerleader for a few years.”

She was also thrust into control of the soccer team after starting off as a volunteer assistant coach.

“I told [the coach], you don’t have to pay me I will come help with skill,” Williams said. “I want my son to grow. I didn’t want him to just be stoic on the team. We ended up working well together.”

Part way through the season though the coach took a break for surgery and then never came back.

“I kind of inherited the team after Thanksgiving,” Williams said. “I had to change the entire dynamic of the program and the first thing was discipline. They had not had that in years. I don’t use profanity in my personal life so I am not going to tolerate it.”

The only won one game that season, but the process of changing the dynamic of the team and making improvements had begun. The following summer she worked together with St. Aloysius  and Porters Chapel to put on a summer skills camp for the three teams.

“The beginning of the summer, before camp, we had a friendly with Warren Central and they slaughtered us. It was horrible,” Williams said. “I was stressing you have to put your foot on the ball every day. You all didn’t grow up playing soccer and it’s not just going to come to you.”

At the end of the summer what was once an 11-1 defeat became a close 2-1 game between the teams. In her first full season as head coach, the Gators saw their win total improve from one to six.

The hard work also paid dividends for three of the team’s seniors, who were able to sign scholarships at William Carey.

“My goal was one and when these seniors came in as juniors that was one of the first conversations we had,” Williams said. “My goal is to get you aggressively moved up to where you can compete at the collegiate level.”

To get her players to that level Williams not only worked with them on the field, but also pushed them to fully dedicate themselves in the classroom.

This past season was her last as head coach of the soccer team, and now she hopes to have as much of an impact on the cheerleading squad as she did on the boys that played soccer.

“Cheerleaders are supposed to be the ambassadors of the school,” Williams said. “We’ve increased our graduation rate. We are doing great things academically. Now, I want us to do great things athletically. I want to dedicate myself to one sport so I can have that expectation of them.”

Williams is hoping to build the squad to the point where they can compete with schools across the state in competitions and hopefully enable members of the squad to pursue cheerleading in college.

As far as soccer goes, she may not be their coach anymore, but she is not planning to fully abandon the sport.

“I am going to go to the elementary school and the junior and encourage those kids to try out,” Williams said.

Mellon: Think we serve a purpose