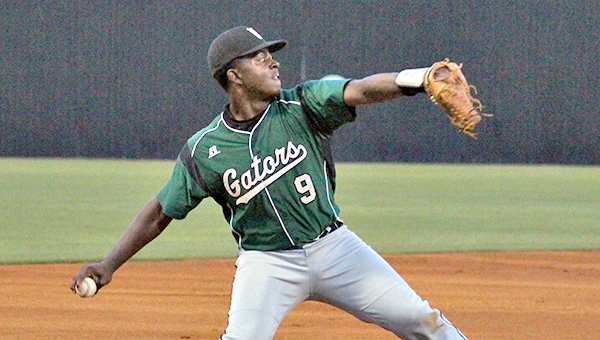 Clinton scores 10 runs in first inning to blow past Gators

CLINTON — Just before lightning from a distant storm danced over the trees at Arrows Field, Clinton’s baseball team brought the thunder.

Clinton sent 14 batters to the plate and scored 10 runs in the bottom of the first inning Monday and went on to beat Vicksburg High 17-1. Clinton’s first seven batters all got hits, including doubles by four of the first five.

“Can you say we came to Rake City?” Vicksburg coach Derrick DeWald said. “We missed a couple of spots, but for the most part they just hit the ball. You’ve just got to give them credit. They’re a good team. They didn’t win their district for no reason.”

The loss in the regular-season finale sends Vicksburg (7-16) into the Class 5A playoffs on a three-game losing streak, and having lost four of its last five. The Gators have allowed at least 12 runs in all of those losses.
The Gators will open the playoffs on the road Friday at Grenada at 6 p.m., and then will host Game 2 of the best-of-three series Saturday at 6 p.m. Game 3, if necessary, is Monday at Grenada.

The Gators’ leadoff man, Tyrese Wolfe, reached base twice and scored a run against Clinton. He led off the game with a single, which was one more hit than the Gators got when they lost to Clinton March 20 at Bazinsky Field, but it was a fleeting high.

Reggie Landing ripped a double just inside the third base bag leading off the bottom of the first for Clinton (19-6), and the hit parade was on. Landing scored on a double by Colby Collier, and Walker Burchfield and Will Clark also doubled.

Burchfield was thrown out trying to stretch his hit into a triple, and was the only one of Clinton’s first eight batters to make an out. No. 9 hitter Parker Lee broke the streak by striking out, but the next four batters all reached base as the Arrows stretched their lead to 10-0.

“They just came out swinging,” Vicksburg catcher Chandler Luke said. “(Starting pitcher Gage Ederington) left up some fastballs, and against a team like that you can’t do that or they’re going to make you pay for it.”

Vicksburg reliever Chris Farrish finally got out of the inning with a strikeout, and pitched two scoreless innings before Clinton got its bats cranked up again. Farrish hit a batter and walked one to start the fourth inning, and the Arrows went on to score seven runs to finish the game via the run rule.

Collier finished the game 2-for-2 with a double and three RBIs for Clinton, which played a number of backups on senior night and substituted liberally once the game was out of hand. Collier, Burchfield and Mason Pigg were the only Arrows with more than one hit.

Pigg went 3-for-3 with three singles, an RBI and two runs scored.

“They just hit the ball tonight. There’s nothing else I can say,” DeWald said.

Warren Central’s late-season slump resumed Monday, and now the Vikings are out of time to play their way out of... read more