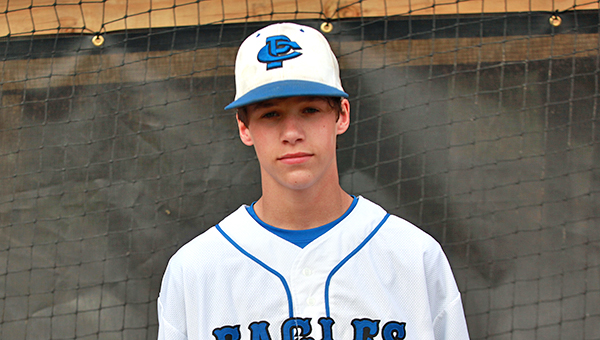 Porters Chapel Academy’s Bradley McCullough had an RBI double in a 10-4 loss to Hillcrest Christian on Monday.

The Eagles left Pierce Field Monday night hoping the main event goes a lot better than the undercard.
Harper Bell went 3-for-5 with a double, RBI and two runs scored, and Hillcrest Christian scored in every inning except one as it beat Porters Chapel 10-4.

Four Hillcrest pitchers held PCA (13-13) to just four hits. Bradley McCullough had an RBI double, and Wade Dickard had an RBI single. Glenn Alan Kittrell also doubled, and the Eagles’ other hit was a single by Cole Pittman.

“It was a bad night,” PCA coach Wade Patrick said. “We didn’t play well at all defensively and didn’t string enough hits together. I thought we pitched well enough to keep us close.”

Hillcrest, however, did enough at the plate to keep steady pressure on the Eagles. After scoring in each of the first four innings to take a 6-4 lead, the Cougars pulled away in the sixth and seventh.

Tyler Estabrook led off the sixth inning with a single, stole second base and then came around from second to score on a bunt by Bradford Patton to make it 7-4.

Estabrook drove in a run with a groundout in the seventh inning. Patton then followed that up with an RBI single and scored on a triple by Joel Estabrook to make it 10-4.

The first three batters in Hillcrest’s order — Bell, Tyler Estabrook and Patton — combined to go 7-for-12 with five RBIs and seven runs scored.

PCA will try to regroup in a hurry for its games this week with Amite. Win both, and the Eagles are into the playoffs as the No. 2 seed from District 5-AA. Lose, and they’re out of the playoffs. The first game of the home-and-home series is Tuesday at 6 p.m. at PCA, and the second is Friday at 6:30 at Amite.

PCA fell into the must-win situation by losing its first three district games, but has since won five in a row to get back into contention for a playoff berth.