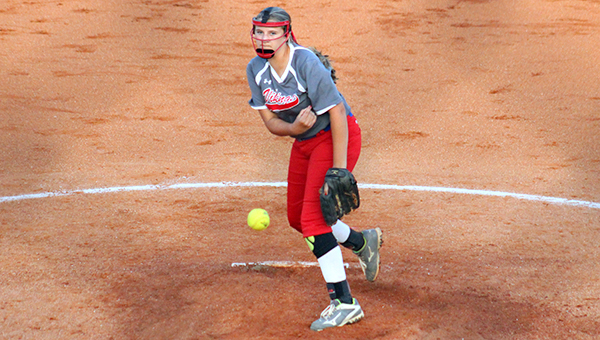 FLORENCE — The last two weeks of Warren Central’s softball season were summed up with one foul ball Tuesday night.

Batting in the second inning, Morgan Stewart sent a ball rocketing toward teammate Kasy Cortezie in the on-deck circle. It caromed off Cortezie’s bat and into the dugout, where it struck starting catcher Sarah Kate Smith in the head.

Smith didn’t appear to be seriously injured, but did have to leave the game. It was a case of bad luck, another injury added to a growing list of them, and another loss for the Lady Vikes — this one a 12-2 setback against Florence — as they headed into the postseason on a down note.

Warren Central (10-13) lost for the sixth time in seven games. It will open the Class 6A playoffs Friday at home against Olive Branch. Games 2 and 3 of the best-of-three series will be played as a doubleheader Saturday at Olive Branch starting at 2 p.m.

“It happens, and you just have to get through it and push through it and have other players step up and take that position,” Warren Central coach Dana McGivney said, referring to Smith’s injury. “It’s hard when you have several (injuries) at one time or several in one season, but that’s no excuse. We’re just not playing the way we should be playing.”

Cortezie, a senior shortstop who has missed most of the season with a knee injury, teamed with junior Madison Wade and freshman Bri Daughtry to split the pitching load. Each saw time in the circle Tuesday, and each had some good and bad moments. Their defense offered little help behind them, however.

The Lady Vikes committed 11 errors that led to nine unearned runs. Florence scored four runs in each of the first two innings, three in the third and one in the fourth to win via the run rule.
After one misplay in the third inning, a frustrated McGivney walked out to the mound and called all nine players in for a conference.

“As of late, that seems to be the tale of the tape for us. We are making errors on plays we normally don’t make errors on, and it’s causing us to get out of our rhythm at the plate because we’re so upset and frustrated with ourselves for making errors. It’s not how we normally play,” McGivney said.

Abby Hasty went 2-for-3 with three RBIs for Florence (16-9).Amber Rutland was 2-for-3 with a double, RBI and a run scored, and Breanna Newell drove in three runs.

The Lady Vikes got off to a good start offensively, then quickly fizzled out. April Lynn’s two-run double staked them to a 2-0 lead in the top of the first inning, but they only had one hit — a second-inning double by Kelsey Lockridge — the rest of the game.

Hasty, Florence’s pitcher, retired 13 of the last 15 batters she faced and only allowed three balls out of the infield the whole game. Hasty walked two batters and struck out two.

In the end, it all added up to another notch in the loss column for the Lady Vikes. They’ve been outscored 68-23 in the last five games and only have a couple of days of practice to turn things around before they put the season on the line against Olive Branch.

“I guess we’ll try to figure that out tomorrow in practice,” McGivney said. “We’ll just go back to the basics and do the things that have brought us success in the past, and hope that they understand that they’re better than what they’re playing. We’re capable of so much more than what we’ve been showing the past couple of weeks.”

Vicksburg residents have an opportunity to learn more about candidates who are running for seats on the Vicksburg Board of... read more