Gators open 5A playoffs vs. Grenada 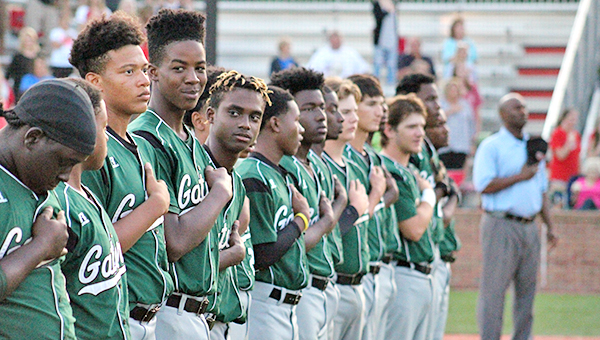 Vicksburg High baseball players stand along the first base line during the the national anthem before Monday’s game against Clinton. The Gators will begin a Class 5A playoff series Thursday at 6 p.m. at Grenada. (Ernest Bowker/The Vicksburg Post)

It’s hard to believe it’s only been two weeks since the Vicksburg Gators felt like they were on top of the world.

The Gators capped one of their best stretches of the season with a win over Ridgeland on April 7, giving them three wins and a competitive loss in a five-game span. Big dreams of playoff series victories danced through their heads.

And then the bottom fell out.

The Gators have lost four of the five games they’ve played since then, and been outscored 54-5 in the losses. The one victory was a sluggish effort over hapless — and winless — Lanier.

Now, as they head to Grenada (14-6) on Thursday for Game 1 of a first-round Class 5A playoff series, the dream isn’t so much of a major upset as simply returning to a competitive level and getting back some of the fire and energy that has seemingly evaporated into thin air.

“Are we satisfied with that one victory that we needed this year? If we are, then we’ll pack it in after this weekend. If we’re not, then we’re going to find a way to scratch and claw this weekend and hopefully come out with a victory,” Vicksburg coach Derrick DeWald said. “But since we won that game (against Ridgeland), over the last five games it’s like we’ve been satisfied. We just show up. We’re not mentally focused.”

Vicksburg (7-16) has not played a weak schedule this season. Eight of its 16 losses, including three during its recent slump, have come against opponents with 15 wins or more. Even so, the last couple of weeks have been frustrating for DeWald and his players.

The Gators followed up their big win over Ridgeland with a 12-1 loss to Pearl less than 24 hours later and have been in freefall ever since. In the four losses, they’ve allowed runs in 16 of the 21 innings played and did not lead at any point. Terry, Warren Central and Clinton all scored in the first inning and Pearl scored in the second, meaning the Gators were playing from behind the entire way.

Senior catcher Chandler Luke said a lack of discipline and focus has been behind the early deficits and lopsided scores.

“We’ve just got to keep working hard and get focused before the games on the bus. We’ve got people playing and stuff on the bus. I guess they’ve seen these past couple of games that it don’t work like that,” said Luke, who is hitting .333 with seven doubles and a team-high 12 RBIs. “It ain’t too late, but we have to stop all of the playing around and just get focused again. I think we can do it, but we can’t play like we have these last two weeks.”

In Grenada, the Gators have drawn an opponent that has had more overall success but similar inconsistency. The Chargers have not won more than two consecutive games since mid-March.

Senior pitcher Dane Bevell (3-1, 0.99 ERA, 35 strikeouts in 28 1/3 innings) leads a pitching staff that DeWald said is good but not much different than what they’ve seen throughout the season. Considering the Gators have had their moments against teams like that, he remains optimistic they can turn things around and be competitive this weekend.

“We’ve played Neshoba Central close. We beat Ridgeland. We’ve played Warren Central, Clinton, Pearl, Terry, whoever else. What we’re going to see Friday night is a team just like that,” DeWald said. “They’re good. They’ve been there and done that. They went to North State last year. Their kids know what to expect, even though they’re a young team, and that’s something we’re trying to achieve to get to the next level. What better way than to go up there and play them and see what we’re made of?”

The key to everything, DeWald added, was preparation and focus mixed with a healthy dose of resolve. Early deficits can be overcome, he said, but only if the Gators don’t fold up when adversity strikes.

“It’s just a mental thing,” said. “It’s not a skill thing, it’s just being mentally focused. Are we focused and ready to play baseball? Or are we just ready to pack it in? Those are the two options we have.”

Vikings seek consistency in first round