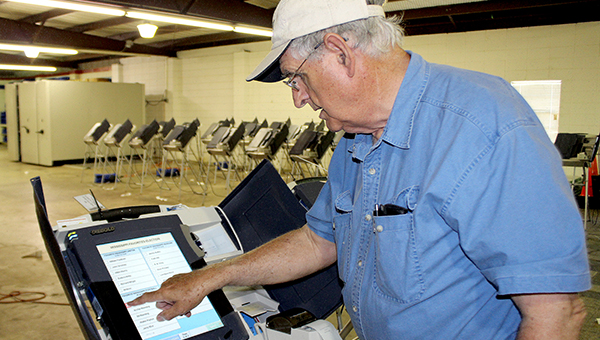 The numbers may be startling at first glance, but Mississippi Secretary of State Delbert Hosemann says that the drop in active registered voters in Warren County in recent years is a sign that election officials are doing a “good job of bringing their voter rolls into compliance.”

According to numbers provided by the Secretary of State’ office, Warren County has a seen a reduction of 3,393 active registered voters in the last two years from 29,762 in January of 2015 to 26,369 currently.

“The only people that can purge the voter rolls are election commissioners,” Hosemann said. “When they started this, they basically take active voter rolls and they look at issues that would allow them to place them on inactive. As of today, there are 7,000 inactive voters on the Warren County list.”

Hosemann said that when he started in 2009, Warren County had more active registered voters than the number of living residents over the age of 18. That percentage is now down to 73.18 percent of the living population over 18, which is on par with the national average according to Hosemann.

“A lot of this is what I would refer to as timely cleanup,” Hosemann said. “That is why you are seeing this reduction. They are actually doing the work county election commissioners are instructed with and elected to do.

“There are still five counties in Mississippi that have more people registered to vote then are alive in them and over the age 18.”

Hosemann said the two biggest reasons people are moved from the active list to being designated as inactive is by not voting in two consecutive federal general elections or by not replying to a jury summons.

The state of Mississippi also participates in a program called the Kansas Project that crosschecks with 29 other state to see if individuals are registered in multiple states at the same time.

Overall, Hosemann commended the election commission in Warren County for maintaining their rolls and bringing them into compliance.

“What is happening, is the election commissioners are doing their jobs,” Hosemann said.

If someone is moved to the inactive list, but shows up at his or her polling location to vote, they will still be allowed to vote via absentee ballot.  They will then be moved back onto the active list, and expected to respond if they are summoned for jury duty Hosemann said.