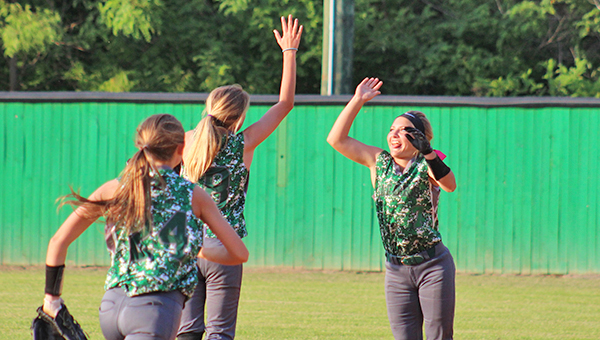 Vicksburg’s Abby Hasty and Bethany Martin high-five each other before a game this season. The Missy Gators will play Center Hill in a Class 5A playoff series beginning Thursday. (Ernest Bowker/The Vicksburg Post)

With his team’s playoff opener about 27 hours away Wednesday afternoon, Vicksburg High softball coach Brian Ellis prepared to put his team through practice without knowing who or where exactly they’d be playing, what the exact schedule of the series might be, and which of his players might be available.

Rain has been at the center of the storm. Some of it is forecast for Saturday, which led most of the state’s teams to move the start of their first-round playoff series up a day to Thursday. Some that has fallen, meanwhile, postponed a game between Lake Cormorant and Center Hill — a game that determined Vicksburg’s first-round opponent — until Wednesday night.

Adding to the chaos, Ellis said, was a wave of illness that has spread through the team and sidelined several players this week.

“I definitely was not wanting to play tomorrow. But if that’s what you’ve got to do, you’ve got to play through adversity,” Ellis said before Wednesday’s practice. “We know we’re going to be playing a Game 1, and if we control what we can control we’ve got a chance to win a ballgame.”

That idea of controlling themselves is what Ellis has been preaching this week. The Missy Gators have often been their own worst enemy this season. They’ve committed 28 errors in their last seven games, and in most of their losses have made multiple errors.

Cleaning up those mistakes, Ellis said, was crucial to any chance they might have of surviving the first weekend of the Class 5A playoffs.

“Our number one thing is we have to play defense. Kayla (Foster) is a pitch to contact pitcher, and if we don’t play defense behind her we’ll have trouble,” Ellis said. “Our mindset is the biggest thing. Control the controllable things. We have to hit the ball and make routine plays. It’s about going out, playing hard and controlling what we can control.”