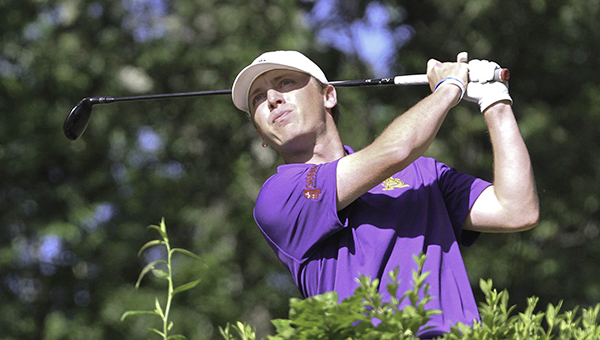 Channing Curtis spent most of Wednesday saving pars and trying to stay at the front of the pack.

At the end, the St. Aloysius senior found himself and Northwest Rankin’s Ryan Bell in a head-to-head showdown on the 18th hole at Vicksburg Country Club and didn’t blink.

Curtis answered a great tee shot by Bell with one of his own and sank a short, but difficult, breaking putt for a birdie. A moment later, Bell missed his putt and Curtis’ scuffling day ended with another tournament championship.

Curtis shot a 75 and then edged Bell on the first playoff hole to win his third tournament in four starts this season at the WC Invitational.

Curtis’ birdie on the playoff hole was his first of the day. He made five bogeys on the par-70 course at VCC, but said he was able to stay in contention with his irons after hitting several wayward shots — including on the par-5 11th hole, when his tee shot went off course and toward the driving range.

“I got up on 11, on the first tee box and shanked it. I hit it into the range. I got up and down. I really didn’t play that well, but I got around. I got myself in tight situations but I was able to get out of tight situations by hitting good shots,” Curtis said. “It’s satisfying that you can do that, but it’s also like, ‘Wow, I had to waste an amazing shot to get out of it,’ instead of hitting one down the middle and making birdie.”

On the playoff hole, both Curtis and Bell hit their tee shots on the 123-yard par-3 18th hole to within a few feet. Bell went first, and then Curtis followed with a nearly identical shot and a successful par putt that was set up by a miss earlier in the round.

“He got up there and absolutely stuffed it. Hit it to, like, 2 feet. So I’ve got the pressure put on me. I hit an 8-iron and hit it about 3 feet short of the flag and stuffed it right on top of him,” Curtis said. “My putt broke probably half a foot, maybe more, on a 3-footer. I just hit it firm. His 2-footer broke a lot more than he thought it would. I had a similar putt earlier when I played 18, and I don’t know if he had a similar putt. That definitely helped.”

Although Curtis took medalist honors, Bell and his Northwest Rankin teammates took home the team title as a consolation prize. They shot 328 as a team to win a tight five-team race with Brandon (330), St. Al (333), Warren Central (337) and Clinton (340).

Northwest Rankin’s Sean Trussell was third in the individual standings after shooting a 76. St. Al’s Wilson Palmertree and Brandon’s Josh Conner tied for fourth with 77s, Jim Hill’s Zacceus Spann was sixth with a 78, and Brandon’s Cole Ketchum was seventh with a 79.

Five of Warren Central’s eight golfers broke 90, which pleased coach Matt Williams heading into Monday’s Division 4-6A tournament at Castlewoods Country Club in Flowood. The Vikings need to shoot 365 or better there to qualify for the Class 6A state tournament.

Leading the way for Warren Central on Wednesday were Reed Buys and Chance Bishop, who both shot 81, Taylor Lampkin (86), Zane Flaharty (88) and Hartley Sullivan (89). Graham Tweedle shot a 90.

“To shoot 337 is really good, because the course is tough. It’s not your typical course where you can hit driver every hole,” Williams said. “You’ve got to be mentally tough, and it’s a physically tough walk. You’ve got to place your shots. Us shooting what we did, I think it’s really good.”

While Curtis and Bell duked it out for the boys’ championship, Warren Central’s Karley Whittington crushed the girls’ field for her second tournament victory in as many days.

Whittington followed Wednesday’s win at Castlewoods by shooting a 75 at VCC to earn a 22-shot victory over Madison Central’s Brogan Randall and St. Al’s Caton Blackburn. Whittington’s only birdie came on the second hole, but only six of the 13 golfers in the tournament broke 100 and she was not challenged at all.

“She shot 75 today, and (Tuesday) she shot 4-over at Castlewoods, and those are two tough courses. So she’s getting her game where it needs to be to be ready for state when we have it in a couple of weeks at Clear Creek,” Williams said.

Caton Blackburn had the low score for St. Al with a 97. Chandler Tucker shot 107 and Elizabeth Keen 116. Blackburn followed last week’s win at Castlewoods by tying Randall for second place at VCC.

Mia Wamsley shot a 99 for Warren Central and Sydney Stuart a 104. Warren Central will host the MHSAA Class III state tournament May 1 and 2 at Clear Creek Golf Course in Bovina, and Williams said everyone seems to be on track to give the Lady Vikes a chance at their second team state title in four years.

“Mia and Sydney are really understanding now how to get around a golf course,” Williams said. “People are going to look and say you have one shooting in the 70s and the other shooting in the 100s or the 90s, and that’s what we need. Our goal is to get somewhere 170 or below. If we’re in that number, then that Tuesday afternoon we might be holding that trophy.”