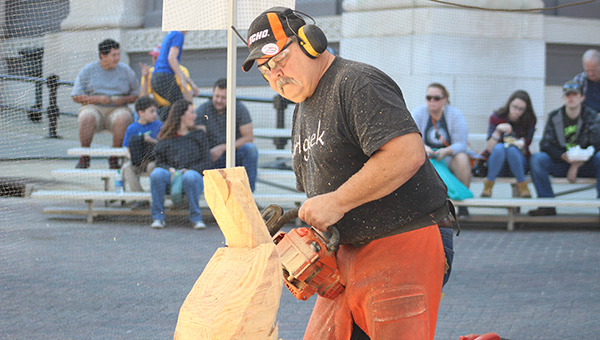 CHAINSAW ART: Artist Burt Fleming uses his chainsaw to carve a wood sculpture of an indian during the recent RiverFest in downtown Vicksburg. Some of Flemin’s work, which was left for Main Street to sell after the festival, was reportedly stolen.

Vicksburg Main Street officials are looking for four woodcarvings that have been missing since the close of RiverFest about two weeks ago.

Main Street director Kim Hopkins said the 4-foot tall carvings of a bear, Indian, parrot and a pelican are valued about $450 each and were carved during RiverFest.

She said the carvings, created by artist Burt Flemin, were moved to the corner of Washington and Clay streets at the close of the annual festival on April 8. She said no police report filed.

Main Street’s Facebook page has a post about the missing carvings with a request for whoever has them to return them, and a telephone number to call if someone knows the whereabouts of the items.

“They are quite heavy and it takes at least two people to move them; we had to roll them when we moved them,” Hopkins said.

“We moved them to open the street for traffic at the end of RiverFest,” Hopkins said. “Usually, the city workers who remove the barricades pick the carvings up for us, but we found out two days later that they didn’t do it. There was some miscommunication.

“We thought one of the businesses might have picked them up and put them in their building and were keeping them for us, but no one has them.”

All Main Street officials, want, Hopkins said, is for whoever picked up the carvings to return them, “No questions asked. “