Alligator, who had become a popular Facebook topic, is captured 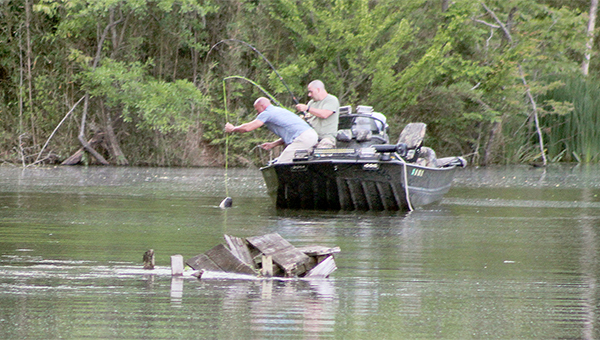 Licensed trappers capture an alligator, estimated to be larger than 10 feet in length, Thursday in the Warrenton Lakes Subdivision. The alligator had been spotted by many in the neighborhood, leading to a large number of Facebook posts and traffic problems along the lake as people stopped in hopes of seeing the alligator. The trappers and officials declined the opportunity to take photos of the captured alligator.

Alligator trappers licensed by the State of Mississippi removed an alligator Wednesday evening measuring more than 10 feet long from one of the lakes in Warrenton Lakes Subdivision off U.S. 61.

The alligator’s arrival, which was broadcast on Facebook early Tuesday, attracted gatherings of residents hoping to catch a glimpse of the beast, and resulted in calls to Vicksburg-Warren 911 and the Mississippi Department of Wildlife, Fisheries & Parks, which dispatched the trappers to remove the animal.

The alligator report was one of many state wildlife officials have received this spring, and officials said more are expected through April and May.

“We’re going into the breeding season for alligators, and this is the time of year they will move from one place to another,” said Ricky Flynt, a state wildlife biologist and coordinator of Wildlife and Fisheries’ alligator/furbearer program.

“Juvenile alligators are being run out of their territory and they’re trying to find territory of their own, so April and May are probably peak months of alligators moving from one water body to another, or along a water body.

Flynt said wildlife officials are receiving calls and complaints about alligators, adding, “We get calls all through the spring, but most of it is someone saw one. In the last couple of weeks, we’ve started getting calls about them walking across highways or across yards, going from water hole to another. That will continue on for the next month or so.”

Whether wildlife officials remove an alligator, Flynt said, depends on the situation.

“If the alligator is in a place where we feel confident people are not going to harass it or cause it any problems, and the alligator’s in a safe place not causing any problems with people, sometimes we just leave them alone.”

But in the situation with the alligator at Warrenton Lakes, he said, “Because people were aware of it, it was a popular thing; they were out there looking for it. It’s better for us to go out and remove it.

“If it’s a place that is not a typical alligator habitat, it’s better for us to remove it.”

Flynt said the department’s policy is to not relocate alligators longer than 6 feet.

“Alligators in the 7-foot range and higher are euthanized, and our agent alligator trappers, who are licensed through our agency, are capable of commercially disposing of the alligator,” he said.

And while there has never been a documented alligator attack on a human in the state, Flynt said people need to practice caution when they see an alligator.

“Obviously the best precaution is just to keep your distance, and most all situations, the alligator is not going to be of any danger to people,” he said.

“The only time we have problems with alligators being a problem around people is when people have been feeding them, and that usually takes some time for the alligator to be conditioned to being attracted to human activities because of the source food.

“In any normal situation, alligators are going to avoid human activity.”