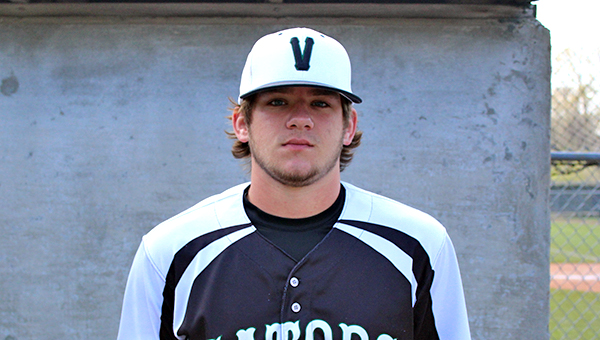 Vicksburg High catcher Chandler Luke had one of the team’s two hits in a 10-0 loss to Grenada in Game 1 of a Class 5A playoff series Thursday.

The Vicksburg Gators didn’t give up any big innings Thursday, just enough little ones to push their season to the brink.

Game 2 of the best-of-three series is Friday at 6 p.m. at Bazinsky Field. Vicksburg needs to win it, as well as Game 3 Monday in Grenada, to avoid elimination.

Grenada (15-6) scored in all five innings of its run-rule victory in Game 1, but not more than three runs in any inning. That followed a troubling pattern for VHS (7-17), which has lost five of its last six games and allowed a run in 21 of the last 26 innings it has played in those losses.

Pitcock got things started for the Chargers when he led off the bottom of the first with a single and eventually scored on a hit by Gage Little. Little later scored on a ground out to make it 2-0.

Grenada ended the game by scoring twice in the bottom of the fifth, on an RBI double by Pitcock and an RBI single by Albritton.

Albritton and Morgan each finished with two hits and two RBIs, and Morgan also shut the Gators down on the mound.

Morgan struck out seven, walked one and allowed two hits in a five-inning complete game. The Gators’ only hits were singles by Chandler Luke in the first inning and Alfred Barnes in the fifth. The Gators only got one runner past second base, had two thrown out stealing and hit into one double play.