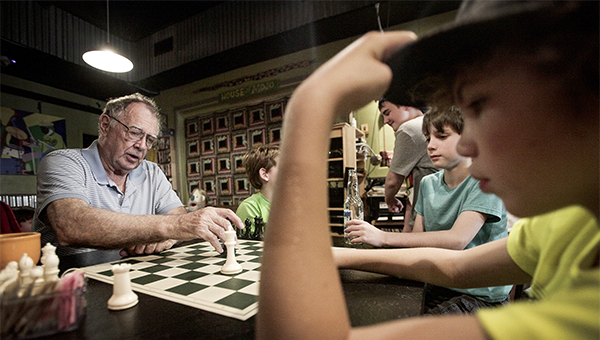 Elijah Montgomery, Sawyer Egger and Adler Mason sat crowded around one side of the chessboard. They had control of two white rooks and a king. Dr. Don Rathburn sat opposite his three attentive students as he deftly moved the black king across the board and taught his students how to build a box and checkmate his king.

Rathburn has been playing chess for 53 years, and Thursday at Highway 61 Coffeehouse in downtown Vicksburg he worked to share his years of experience with a new generation of players.

“They learn to concentrate,” Rathburn said. “They have to be careful of the rules. For example, a young person always wants to reach out and grab a piece. When they do that they are forced to play that piece and a lot of times that can make the decision on whether they win or lose.”

Montgomery, Egger and Mason spent the morning at the coffee shop along with their classmates in the Vicksburg homeschool co-op gifted class for fourth through sixth graders.

The class has been working since September to learn chess as part of their bimonthly co-op class.

“It’s hard,” Montgomery, who’s in fifth grade, said. “Now, for me it is easier to solve problems because chess is a hard game. You don’t just jump over everybody like checkers.”

Many in the class knew nothing about the game when they first started, but on Thursday, six months after their first lesson, they battled back and forth and showed off their developing skills.

Mason, who’s in fourth grade, added, “I like it because it is fun and it teaches you to think and I like to beat people at stuff.”

Chess was initially introduced to the students by co-op gifted teacher Candace Logue who used the game to teach her students concentration and patience and help improve their problem solving skills.

“You don’t often see people sir still these days unless they are starting at a screen,” Logue said. “These students can’t wait to sit still and quietly plan strategy to beat the socks off their opponents.”

She was then able to bring in Rathburn to provide the students with an expert teacher to fine tune their skills and strategy.

“It was fun,” Montgomery said. “He taught me that you don’t need all the pieces to check mate. You can checkmate. It was surprising that I could do it with just two pieces.”