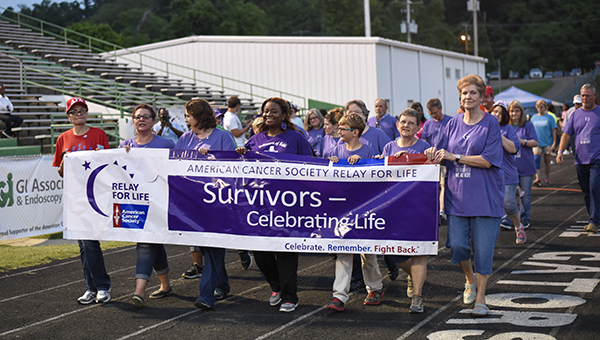 The red T-shirts said “Team Randy” on the front and “Knock out Cancer” on the back.

Cancer patient Randy McClure, his wife Lynn and a small group of what was expected to be 20 people to walk with them during the Relay for Life were gathered by the American Cancer Society tent, where Randy and Lynn stopped to sign in.

“He has two brain tumors, one bleeding, and two tumors in his lungs,” Lynn said. “We’re headed back to MD Anderson (Cancer Center in Houston, Texas) next week.”

Randy said he was diagnosed with cancer four years ago. His prognosis gives him eight months.

The couple and their friends have been walking in the relay since he received his diagnosis.

“We have some good friends,” he said. “They have been so great to go through this with us.”

The McClures were among the hundreds of cancer patients, survivors, family members and supporters who spent Friday evening at Memorial Stadium across from Vicksburg High School to participate in the American Cancer Society’s annual Relay for Life to support cancer research.

And groups like Team Randy were a few of the individuals, teams and sponsors participating in the relay, themed “Royal Affair.”

“We have about 25 to 30 cancer survivors in our church,” said Cheryl Lloyd, who served as Queen Hope at Hawkins United Methodist Church’s Castle Cure booth.

“We have five members undergoing treatment now, and we lost a young member last year. We walk for them.”

Carolyn Butler with Believers of Faith, a nonprofit cancer support group, said the organization’s members were walking in support not only of their members who either have or survived cancer, but for others. She said Believers of Faith offers services and support for cancer victims, their families and caregivers “from diagnosis to remission.”

Many participants like the McClures arrived early to register as survivors. By 6:45 p.m., 46 survivors had signed up for the survivors’ march that began the relay. Some participants walked along the track, while others perused the many booths lining the football field.

Randy McClure was among the older survivors. Others were younger, like 4-year-old Mario Gray Jr.

Mario, or “M.J.,” was born with retinoblastoma, a rare cancer that affects the eyes. The disease has already caused him to lose his left eye.

“We just got back from St. Jude,” his mother, Lauren Forte, said. “He has to go every three months.”

She added her four-month-old son Major goes to St. Jude every six months to be checked to see if he also has the genetic disease. “He goes until he’s 5,” Forte said. “He (M.J.) will have to go forever.”

She said the periodic checkups at St. Jude are done to make sure the disease doesn’t spread to M.J.’s other eye.

Another survivor had something to celebrate.

Cherry Ozburn was diagnosed in May 2016 with Hodgkin’s lymphoma.

“Last week, I learned I was cancer free,” she said as she sat in a chair wearing a blue bandanna on her head and a T-shirt that said, “I will fight against Hodgkins lymphoma because God chose me to fight it.”

When she heard the news she was cancer free, she said, “I was excited. I get to see my girls grow up.”