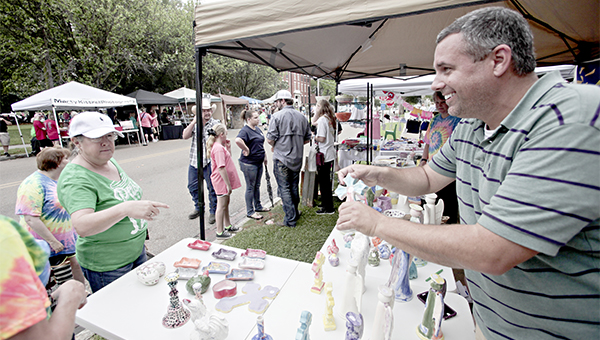 Not even the occasional light drizzle of rain and an overcast sky that threatened more at any moment could slow down Saturday’s Old Court House Museum Flea Market.

The market featured 98 booths selling a variety of homemade arts and crafts as well as food vendors.

The event was free to attend, but vendors had to pay a fee to participate. The proceeds from the vendor fees are used to support the general upkeep of the Old Court House Museum.

“It is a good source of money for the museum every year,” said George “Bubba” Bolm, curator and director at the Old Court House Museum. “I’ve been down there for a little while and the crowds are good, people are selling and everybody is walking around with a bag.”

Those that braved the elements to attend the market had plenty of options including handmade pottery, birdhouses, wooden furniture and more.

“I never miss one,” David Haworth said. “It is fun. I see a lot of people that I know and look forward to seeing. I always find stuff that I like to buy. I’ve already made one trip to the car.”

Five-year old Adelynn Southerland brought her own hand painted shells and rocks that she was selling to raise money for St. Jude Children Research Hospital. “She did a thing at her school [Crawford Street Playschool]. They did a trike-a-thon,” Trisha Southerland Adelynn’s mom said. “She was going to do the craft show with her sister and decided she wanted to give all her money to ‘the sick kids.’”

In the first three hours of the sale, Adelynn raised $100 to donate to the hospital.

“It makes us pretty proud that she is doing that. She just turned five in March. She has been sitting for about three weeks painting all of her shells and all of her rocks and glittering them.”

Jacob Craig traveled to the market from Gulfport to sell his pottery made from clay that he digs and refines himself. This is the fourth time in a row that he’s made the trip to Vicksburg.

“I have friends here in Vicksburg and I like having people come up ‘I bought something from you last year. I have to buy something from you this year,’” Craig said. “It is all hand dug clay from Harrison County. I dig it up out of the ground, refine it, make workable clay out of it and wheel throw it into bowls or whatever form I want.”

The Old Court House Museum hosts the market twice a year, in April and October.