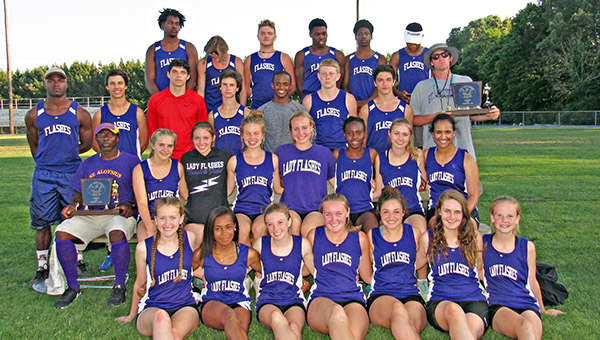 Members of St. Aloysius’ boys’ and girls’ track teams pose with their trophies after both teams won the District 3-AAA championship on Friday. (Submitted to The Vicksburg Post)

St. Aloysius got both of its track and field teams off to a running start in the MAIS postseason.

The Flashes beat runner-up Hartfield Academy 102-71 and had 19 entries finish in the top four to advance to the North State meet that begins Wednesday at Lee Academy in Clarksdale.

The Lady Flashes also beat Hartfield, 73-61, and had 16 entries advance to the North State meet.

“It was a great day,” St. Al coach Michael Fields said. “We pretty much advanced everybody that we thought we would. We were running on an asphalt track, so our times were slower, but we ran well enough to solidify our chances at North State and we can be in the top three at State and have a chance to win it all if we run well.”

St. Al had two of the most dominant athletes in either meet, with Polk on the girls’ side and Donald Woodson on the boys.

Polk swept the distance events by winning the 800, 1,600 and 3,200 meter runs. Other girls’ winners were Olivia Curtis in the high jump and Dede Apenyo in the 400 meters.

“Donald has worked hard. This is something he’s wanted. He wanted to fill DeMichael (Harris’) shoes,” Fields said, referring to the former St. Al sprinter who was the Mississippi Gatorade Player of the Year in track and field in 2015 and 2016. “He’s not quite running those times, but he’s getting to where he’s well-respected.”

Woodson isn’t the only one. Jaylen Whitaker won the shot put on Friday with a personal-best mark of 50 feet, ½ inch.

“He’s either No. 1 or No. 2 in Mississippi, and that’s in the MAIS or the public schools,” Fields said.
Other individual winners for the Flashes were Brayden Roesch (pole vault), Jamar Williams (400 meters), Garrett Vincent (110 meter hurdles) and Chandler Roesch (1,600 meters).

The Flashes also swept the four relay events. Woodson was joined on the winning 4×100 and 4×200 meter relays by Antonio Thompson, Williams and Preston McGowan.