Lady Vikes head to Olive Branch with season on the line 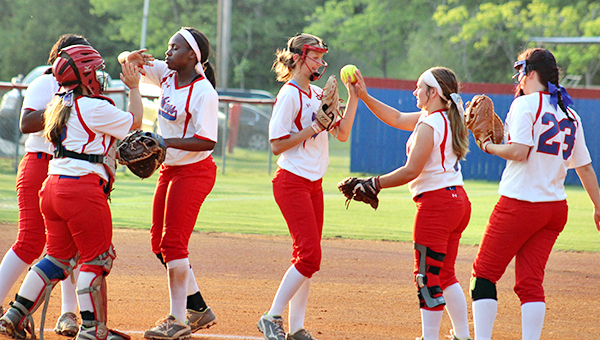 Warren Central softball players go through their handshake routine between innings of Friday’s game against Olive Branch. WC and Olive Branch will play Monday in Olive Branch in Games 2 and 3 of a Class 6A playoff series. (Ernest Bowker/The Vicksburg Post)

From injuries to errors, a lot of things have gone wrong for the Warren Central Lady Vikes the last two weeks. They’ve lost five games in a row and have no more margin for error to keep their season alive.

Even so, there was plenty of reason for optimism after the latest loss, a 5-4 setback Friday in Game 1 of a first-round Class 6A playoff series against Olive Branch. The Lady Vikes hit well in spots and kept the game under control, even if they didn’t win it. It was a definite step in the right direction as the Lady Vikes (10-14) go to Olive Branch (5-14) needing to win Games 2 and 3 on Monday.

“We’re getting closer to the team that I love,” WC coach Dana McGivney said. “For the past two weeks we hadn’t been that team at all. But we’re getting closer to my team, and I like that. That’s a step in the right direction. If we can just do a little bit more, I think Monday will be a different story. We can come out on top Monday.”

Another reason for McGivney’s optimism was the prospect of getting several players back in the lineup. Catcher Sarah Kate Smith, infielder April Lynn and outfielder Megan Stewart all missed Game 1 with various injuries.

Their replacements reached base four times in 12 plate appearances, but none had a hit.

As a team, the Lady Vikes only had five hits and left six runners in scoring position in the last four innings. The opportunities the Lady Vikes had led McGivney to believe it was more execution than a difference in talent that separated the teams in Game 1.

“They’re (Olive Branch) not a bad team, but I feel like we should have beaten them. But we didn’t, so it doesn’t matter what I think,” McGivney said with a chuckle.

The one glaring hole that remains in the lineup is at pitcher, where Kaylee Hoeft remains sidelined with a hand injury. She had a 3.59 ERA and 28 strikeouts in 39 innings pitched before going on the shelf at the start of the team’s losing streak.

Junior left-hander Madison Wade picked up the slack in Game 1. She pitched a complete game, allowing five runs — only three earned — while giving up four hits and three walks.

“She stepped up and played a really good game,” McGivney said. “She threw strikes and kept us in the game, and that’s all we can ask for. She pitched seven innings and kept her pitch count low, so that’s good. So it’s definitely a step in the right direction.”

The bigger challenge will be getting through two games with a pitching staff still being held together by duct tape. Senior shortstop Kasy Cortezie is the backup pitcher, and freshman Brianna Daughtry is also available, but all three pitchers have had bouts of ineffectiveness.

McGivney said the answer was to limit Olive Branch’s opportunities by playing good defense behind them.

“We put ourselves in a bind having to play two games and pitch for two games. As long as we’ll throw strikes and let our defense work, I think we’ll have a shot at it,” McGivney said.