Roy honored as 911’s dispatcher of the year 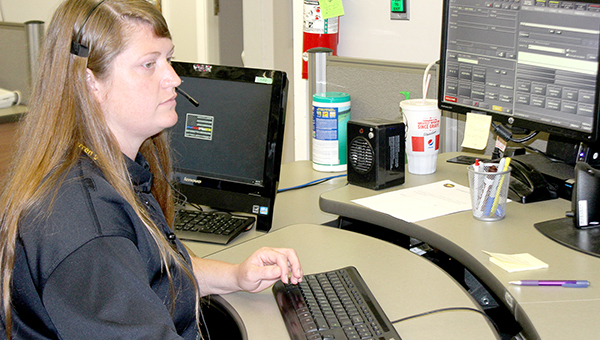 TOP DISPATCHER: A dispatcher for two years with Vicksburg-Warren 911, Catherine Roy was named the communications center’s dispatcher of the year.

Catherine Roy is tops in her field.

After serving two years as a dispatcher for Vicksburg-Warren 911, Roy was named dispatcher of the year for the communications center.

Deputy 911 director Shane Garrard said the award is voted on by the system’s three supervisors, based on several criteria.

“Write-ups, commendations, call-outs, tardies all come into play,” he said. If a dispatcher is written-up for an infraction in their file, they do not qualify for the award.

“It’s definitely not a popularity vote, because these dispatchers earn their respect from their peers from stepping up and showing authority. Taking over situations, and in the long run, that’s what people want — somebody that’s going to show them the right way, and not going to lead them astray, and she excels at that.”

Jessica Janotta, a 911 supervisor who oversees a different shift than Roy’s, has worked with her in the past.

“I’ve covered with her and worked with her. She’s a good worker. I don’t ever have to worry about whether she’s doing what she needs to be doing; she’s takes control of the situations, she’s able to answer any questions her subordinates might have, and she can tell you the answers. She can run any shift she is on.”

When Roy first applied for a dispatcher’s position, she was looking for a job with the same benefits and retirement she had from her previous job.

“I kind of fell into this. I drove a school bus nine years,” she said. “I had no idea what it (dispatcher) consisted of. I just applied and ended up getting it. Actually, I love it. It’s one of those jobs that just fell into my lap and I enjoy it.”

There were times early on, however, when she wondered if she was in the right place.

That occurred during the early part of her training, when she sat in the communications room observing dispatchers and listening to radio traffic before she began her 40 hours of basic training.

Roy said no one call sticks in her mind as very unusual or strange, adding, “You get unusual and strange every day.”

The changing scenarios, she said, is what makes the work interesting.

“Dispatch is different every day. You never know what you’re going to walk into. I like the excitement; getting the call and following it through. I like where I am.”

Dispatchers work alternating day, night, and weekend shifts. Roy said she prefers working days, “So I can keep the same schedule with my kids. When I’m off, I want to sleep all day and stay up all night.”

She said the schedule of working two days on with two off during the week, or weekend shifts with three days on and three off, help her balance work and family.

Roy called receiving dispatcher of the year “very exciting,” and said she’s looking to moving to a higher position.

“When I applied — in my interview — I told them (911 officials) in two years I wanted to have some sort of promotion. It’s been two years, and I’m working on lead dispatcher for a shift.”