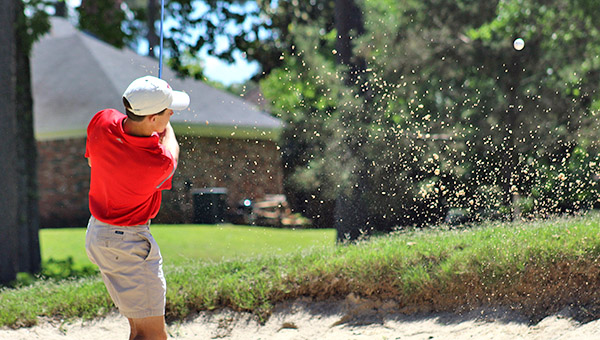 Warren Central’s Graham Tweedle hits out of a bunker on the third hole at Castlewoods Country Club on Monday during the Region 2-6A golf tournament. (Ernest Bowker/The Vicksburg Post)

FLOWOOD — Where Warren Central’s boys’ golf team finished at the Region 2-6A tournament wasn’t as important as how it got there and where it was going next.

The Vikings finished fourth out of four teams, but it didn’t matter. They posted a team score of 351 Monday at Castlewoods Country Club, 14 shots clear of the cutoff to qualify for next week’s Class 6A state tournament.

“It’s huge for us as a program,” Warren Central coach Matt Williams said. “The boys fought hard at a difficult course. Our score was not the lowest we’ve had this year, but the way they continued to play and battled shows that the boys have matured a lot and knew what this tournament meant.”

The Vikings needed to shoot 365 or lower to qualify for the state tournament. Only two of their five golfers broke 90, but they got there thanks to a great round by Chance Bishop.

Bishop shot a 78 to finish in a three-way tie for fourth place in the individual standings. His score improved by 15 shots from the last time the team played at Castlewoods two weeks ago.

Warren Central’s other golfers were Reed Buys, who shot an 89, Taylor Lampkin (91), Graham Tweedle (93) and Hartley Sullivan (94). All of them had worse rounds than their first trip to Castlewoods, but Bishop’s outstanding round allowed the Vikings’ team score to improve by nine shots. The top four individual scores count toward the team score.

“Chance stepped up big time when the others were struggling and posted a 78. That gave us some breathing room,” Williams said.

Madison Central also won the team championship with a score of 306. Northwest Rankin was second with a 323, Clinton was third at 342 and Warren Central fourth at 351.

Northwest Rankin shaved 26 shots off its team score from the last Castlewoods tournament, and Clinton was 20 shots better.

The next challenge for Warren Central is the state tournament, which will be a familiar situation in an unfamiliar setting. The team has not played a tournament there since 2013, but has spent the past month playing new courses sight unseen — first at Castlewoods on April 12 and then at Vicksburg Country Club a week later.

Williams said the Vikings will head to Tupelo a day early to play a practice round next Tuesday to familiarize themselves with the course.

The Vikings haven’t had any golfers consistently shooting in the low- to mid-70s — the score that will probably be needed to contend for an individual or team championship — but if all goes well Williams feels they can finish in the top 10 in the team standings.

“The boys will have to concentrate hard on not posting a big number on a hole. That was a problem for us today. We had too many shots that were bad placement on the green and then left us lengthy putts with resulted in a bunch of three-putts,” Williams said. “Tupelo Country Club is known for lightning-fast greens and we have to be very patient and precise to score well. We’ll go up and get a practice round in on Tuesday and get a feel for it. The key will be getting used to the speed of the greens.”

While the boys are heading to Tupelo, Warren Central’s girls’ team is staying a lot closer to home for the postseason. The Lady Vikes will host both the Region 3, Class III tournament and the Class III state tournament at Clear Creek Golf Course in Bovina.

The one-day region tournament is scheduled for Thursday at 9 a.m.

The Class III tournament is a two-day event set for Monday and Tuesday.