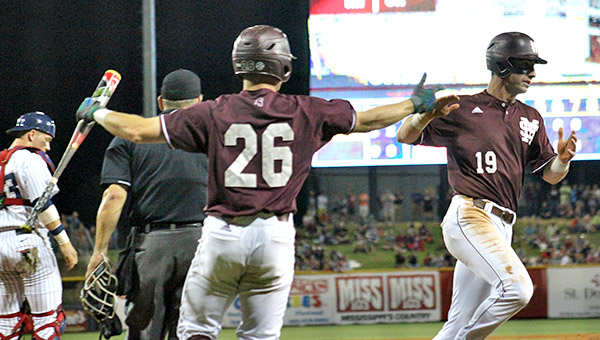 Mississippi State’s Brent Rooker (19) gets a high-five from teammate Cody Brown as he scores a run in the eighth inning Tuesday against Ole Miss. Rooker hit a three-run home run and scored twice to lead the Bulldogs to a 4-2 victory. (Ernest Bowker/The Vicksburg Post)

The junior first baseman hit a three-run home run, and then doubled and scored a run later on, as the Bulldogs beat Ole Miss 4-2 before a Trustmark Park-record crowd of 8,536 Tuesday night.

Mississippi State swept the season series against its archrival for the first time since 1997, and has won four of the last five Governor’s Cup games. Overall, MSU leads the Governor’s Cup series 20-18. The annual contest played close to the state’s capital does not count in the Southeastern Conference standings.

Rooker finished the game 2-for-4 with a home run, double, three RBIs and two runs scored to break out of a two-week long slump. He had been 4-for-26 in his last seven games, but raised his batting average back up to .403 with Tuesday’s performance.

“What a great night,” Mississippi State coach Andy Cannizaro said. “The atmosphere was great. I am excited because the kids played a complete nine innings tonight. We picked up some timely hits, played well defensively and pitched it well. We have been talking about playing better on Tuesday nights. We really played well in this game.”

Denver McQuary (1-1) threw 5 1/3 innings to earn his first victory with the Bulldogs. The freshman right-hander allowed five hits and two runs, both earned, with four strikeouts and five walks. Four relievers finished up a solid effort from the picthing staff, with Riley Self working a scoreless ninth for his second save of the season.

“Denver kept battling,” Cannizaro said. “He couldn’t locate his fastball early but he did a great job with his changeup. He threw it more often than he usually does. It was a pitch that was working so we kept going with it. The bullpen was really great after that. Riley was in complete control there in the last inning.”

Mississippi State (29-14) got all of the runs it needed in the fifth inning, when Hunter Stovall and Jake Mangum got things started with back-to-back one-out hits. Rooker then crushed a ball to left center for his 17th home run of the season.

Rooker’s 17 homers are the most by an MSU player since 2009, when Connor Powers belted 19.
The Bulldogs got a critical insurance score in the eighth inning as Rooker hit a leadoff double and scored on a single by Ryan Gridley.

Ole Miss (25-16) battled back with two runs in the sixth inning. Thomas Dillard hit a ground rule double and scored on a base hit by Cooper Johnson. Johnson, in turn, scored on a double by Tate Blackman to cut it to 3-2.
Johnson, the Rebels’ freshman catcher, went 2-for-4 with an RBI and a run scored on his 19th birthday. He also threw out two baserunners

Ole Miss, however, didn’t get another run as it continued to struggle against MSU’s pitching staff. In the four meetings this season, the Bulldogs only allowed nine runs.

Greer Holston (2-3) threw six innings and took the loss for Ole Miss. He allowed three runs on six hits and a walk, and also struck out three.