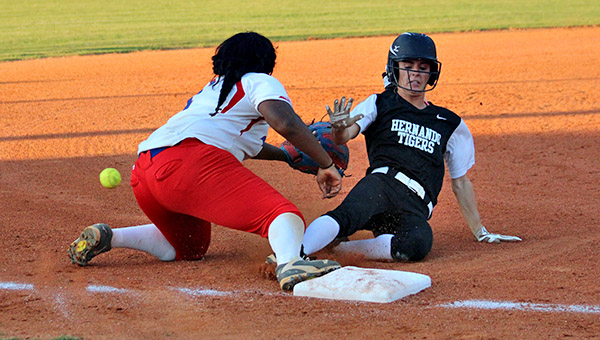 Twenty-four hours after stepping back from the brink of playoff elimination, Warren Central was right back where it started.

Hernando scored three runs in the top of the sixth inning and three more in the seventh, and escaped with a 6-2 victory over the Lady Vikes Tuesday in Game 1 of a Class 6A softball playoff series at Lucy Young Field.

Game 2 and, if necessary, Game 3 of the best-of-three series will be played as a doubleheader Thursday at Hernando beginning at 5 p.m. Warren Central (12-15) needs to win both to win the series — the same situation it was in Monday, when it accomplished the feat in a first-round series against Olive Branch.

“The fact that they know they can go up there and win two games, they did it yesterday, so they know that it’s not impossible, helps. Even though we’re down a game you can’t count us out because we can show up and finish,” Warren Central coach Dana McGivney said.

Much like in its Game 1 defeat in the previous round, the Lady Vikes played well enough in defeat Monday to believe they’re capable of still taking the series. They led 2-0 through five innings before things fell apart in the sixth.

Two bunt singles and a fielder’s choice put runners at second and third with one out for Hernando (20-7). Kailey Hilderbrand hit a sharp ground ball to third and Kelsey Lockridge fielded it and threw home to cut down the lead runner Caroline Casey.

Casey dodged the tag at the plate, however, and knocked the ball out of the glove of WC catcher Sarah Kate Smith in the process. Vivian Stringfellow hustled home as the ball dribbled away to score the tying run.

“I just didn’t get a good handle on the ball, and then the girl hit me and knocked it out,” Smith said.

Hilderbrand wound up at third on the play and scored on a sacrifice fly by Cam Hall to give Hernando its first lead of the game, 3-2.

The Tigers put the game out of reach in the top of the seventh. Jaclyn Carter led off with a pinch-hit double and went to third on a bunt by Casey — who wound up at second with a double that traveled about 5 feet as Smith held the ball in front of the plate to keep Carter from scoring.

The Lady Vikes pulled the infield and outfield in to try to keep the margin at one run, but Stringfellow made them pay. She ripped a double over the head of left fielder Morgan Stewart and wound up at third with a two-run triple. Stringfellow scored two batters later on a base hit by Hall to make it 6-2.

Warren Central, despite playing five superb innings, didn’t hit enough to keep up. It finished with five hits, including two each by Stewart and Lockridge.

The Lady Vikes got their early lead with single runs in the third and fourth innings. Kasy Cortezie led off the third inning with a double and scored on a groundout by Megan Stewart. In the fourth, Lockridge singled and scored on a misplayed grounder.

Lockridge and Hall, Hernando’s third baseman, got tangled on the play and McGivney alertly sent her home. Lockridge was tagged out at the plate, but the contact at third base was enough to draw an interference call that gave the Lady Vikes the run and a 2-0 lead.

It was their last offensive hurrah, though. Hilderbrand allowed three hits and a walk over the last three innings, but stayed out of too much trouble. None of the runners got past second base. Hilderband finished with seven strikeouts in her complete game victory.

“It’s just a matter of playing relaxed, and we did through five innings and then we got a little tense and didn’t do what we needed to do,” McGivney said. “At this time in the season you have to expect the other team is going to score runs and you just have to score with them. We didn’t hit like we have been hitting the past few games. It’s not necessarily that she was throwing anything we couldn’t hit, we just didn’t. She did a better job than we did.”

Warren Central pitcher Madison Wade also pitched a complete game and was sharp before running into trouble late in the game. She allowed two hits and faced two batters over the minimum through the first five innings. At one point she retired eight batters in a row.

“Madison pitched a good game and we played good defense behind her,” McGivney said. “We made a couple of errors — a couple of mental mistakes, not necessarily errors. It happens.”