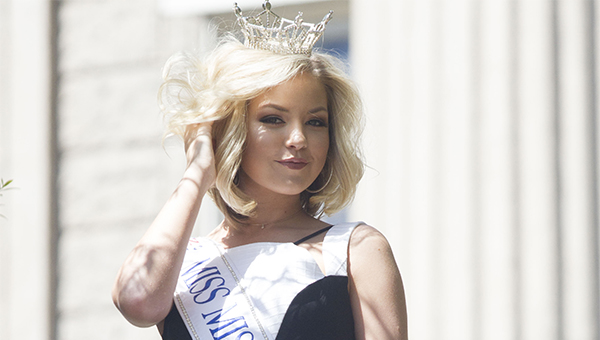 Daring to dream is how Miss Mississippi’s Outstanding Teen Stella Ford won the crown as the state titleholder.

“I just think the sky is the limit and daring to dream is something I have always believed in since I was a little girl,” Ford said, even when skeptics challenged the Brandon High School senior.

“I had a really hard time at school with people telling me that I could never be a singer or go out and live the life I really want to live,” she said, but last June, Ford’s determination proved them wrong.

And in was this optimistic outlook on life, that also calculated into Ford’s pageant platform, D-R-E-A-M — to have DESIRE, be RELENTESS, ENVISION and use ACTION and MOTIVATION.

“I have always felt that girls and guys, nowadays, don’t get the motivation and encouragement they need, so they can go out and pursue their dreams.”

They are told either what they want to do is not good enough or that they can’t ever do it or ever accomplish the things they would like to do, so that’s how I came up with D-R-E-A-M.

“It’s been really cool to go around and speak to little kids and hear how some of them want to become a ballerina or fireman,” she said.

In addition to Ford’s encouragement for others to pursue their goals, the
titleholder advocates striving for personal excellence.
“Always compete with yourself,” Ford said.

She even shared this concept with this year’s Miss Mississippi Outstanding Teen contestants during an orientation held at the Purks YMCA back in February.

“I told the girls don’t try to compete with others. Don’t try to be better than other people. Always be in competition with yourself, and you will always go forward and do good because you are pushing yourself.”

While serving as Miss Mississippi’s Outstanding Teen, Ford said, her reign has flown by.
“It just seems like last month I was crowned,” she said.

Actually, Ford’s year will be cut short by about six weeks because this year’s pageant has been moved earlier in the year to April. But Ford said that even with a shortened year, it would be a year to remember.
“After being crowned, I was on the go every single day for appearances or getting ready for the National pageant,” she said.

The Miss America’s Outstanding Teen Pageant was held in August and Ford said the experience was incredible.

“I think it was cool going to the Miss America’s Outstanding Teen Pageant and meeting girls that have the same dreams that I do. It didn’t even seem like a competition. We were all just there. We had already won what we wanted to win, so we were just there enjoying our time with each other. To me that was so important because it wasn’t even about the competition any more, it was just about finding girls that have the same interest as you and to get to share that with them,” Ford said.

“One of the most fun things this year for me was having my picture taken with so many people. Everybody would always ask ‘can I have my picture made with you?’ That has been really cool to me, because I never knew how much of an impact I made in kids’ lives, especially kids my age. I know it is really hard to have a role model with someone your age, so this experience has been really neat.”

Ford said she also enjoyed the times during her reign when she visited with younger children.

“I enjoyed being with little kids. Even if I was having a rough day they would always cheer me up and put a smile on my face,” she said.

When asked if she would do this again, Ford said, “absolutely.”

“This year has really changed my life. If it wasn’t for the title, I don’t think I would have had as many doors opened for me and opportunities.”

Ford said she is thinking she may one day compete in the Miss Mississippi Pageant, something she would not have considered before being crowned the 2016 Miss Mississippi’s Outstanding Teen.
“It was something I had never thought about before, but now I have really been thinking about it,” she said.

The 2017 Miss Mississippi’s Outstanding Teen Pageant is scheduled to run this weekend at the Vicksburg Auditorium, 901 Monroe St.

The first preliminary competition is scheduled to begin at 2 p.m. Saturday, April 29 with the second to follow at 7:30 p.m. The final day of competition and crowning will begin at 2 p.m. Sunday, April 30. Tickets are $75 for all three competitions and are available by calling 601-638-6746 or visiting the Miss Mississippi Pageant website.