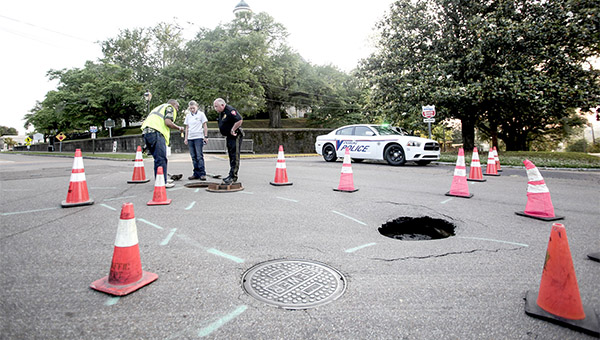 Vicksburg Police Department and Sewer Department inspect a sinkhole that opened up at the intersection of Cherry and Jackson streets Friday evening. (Courtland Wells/Vicksburg Post)

A damaged storm drain has forced city officials to close a large portion of the intersection of Cherry and Jackson streets.

And officials are not sure when it will be reopened.

Public works director Garnet Van Norman said the problem was discovered Friday when a small hole was found in the street. The hole, he said, expanded, forcing the city to barricade the intersection. He said officials are waiting to determine what other lines are under the intersection before they are able to examine the extent of the damage.

“We’re going to try and do the work ourselves,” he said. “But once we get a look at it, we may have to bring in a contractor to do the work.”

Because the city does not have the proper equipment, city utility workers are unable to work on sewer or waterline leaks deeper than 9 feet, requiring the Board of Mayor and Aldermen to declare an emergency and hire a contractor.

The leak is the latest in a series of storm drain and sewer problems. In March 2015, the westbound lane of National Street near its intersection with Washington Street was closed after city sewer department workers discovered a 2-foot deep sinkhole in the street caused by a broken 100-year-old storm drainpipe.

In December 2016, Speed Street was closed after a broken storm sewer line created a sinkhole in the street near the intersection of Speed and Pearl Street that trapped a Waste Management garbage truck that fell into the hole.

Just more than a year ago, the city closed off lanes of Pemberton Square Boulevard when a section of the street began sinking.