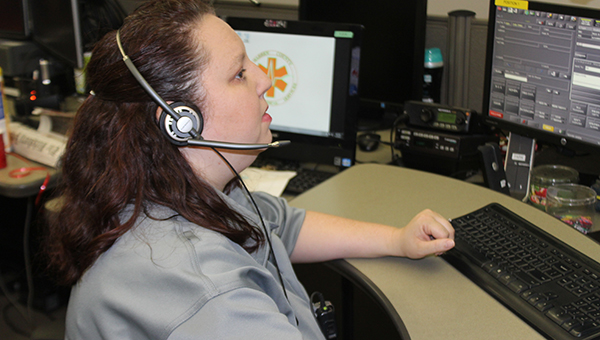 HONORED: Jessica Janotta works a console at Vicksburg-Warren 911. Janotta was voted supervisor of the year by the communications center’s dispatchers.

Jessica Janotta is where she wants to be.

“I’ve always been interested in jobs where I was helping people,” Vicksburg-Warren 911’s supervisor of the year said. “I went to a job fair looking for something different and saw a 911 booth at the job fair and applied.

“I didn’t have any job history or background with law enforcement or fire, and no idea how 911 worked,” she said, adding her previous jobs had been in the hotel and retail businesses, and she had worked as a certified nurse’s assistant. Being a dispatcher, she said, sounded like an interesting job.

But during her first days on the job she wondered if she made a mistake.

Once she went through training and gained experience, she said, she wanted to move up to supervisor.

When she’s on duty, Janotta works at a console with the dispatchers.

“I generally monitor the room; I listen behind all their frequencies and take calls. I’m just monitoring what they’re doing in case they have any issues or need assistance; making sure they’re doing everything they’re supposed to be doing.

“I like teaching, I like training. I am interested in one day taking over a training position. I love dispatching and call-taking, there’s not a lot of dispatchers who love taking calls. I’m one of the few (dispatchers) who enjoys the call taking aspect of it.

Being a supervisor, she said, can be difficult at times, because she has to deal with different personalities “and make sure everybody’s doing what they’re supposed to be doing while still providing a cohesive work environment for everybody.”

Her ability to deal with the team on her shift and other  dispatchers was one of the things that got her supervisor of the year.

The supervisor of the year, deputy 911 director Shane Garrard said, is selected by a vote of the dispatchers.

“I feel very honored to have gotten it,” Janotta said. “I’ve been dispatcher of the year before, in 2011.

“To be supervisor of the year, voted on by the dispatchers, is even more rewarding.”

Like the dispatchers, she works a 12-hour shift from 6 to 6, alternating between day and night shifts.

“I prefer nights, but it’s good to work both days and nights until you get used to what happens during the day, and you become more well-rounded.”

She said she likes the nights shift because “I like the rush of it when you come in at 6 p.m., you’re steady usually until midnight or 2. I like coming in and getting to work and having my down time later.”

And while she has handled her share of strange and unusual calls, Janotta said the calls that stick with her are the ones involving babies and children.

“I’ve figured out this is what I was meant to do,” she said, “This is my calling. I plan to be here for the long run.”

If the race for public office depended on the dollars raised and those supporters donating to a campaign, the 2017... read more