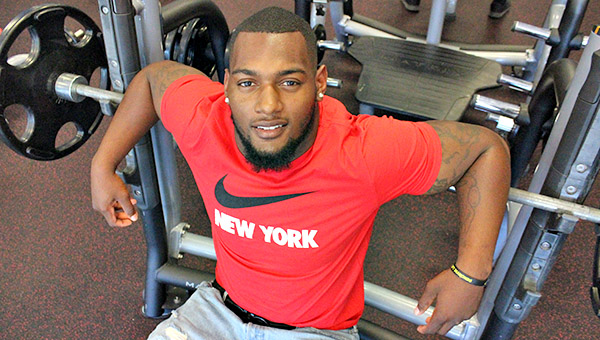 Jackson State linebacker Javancy Jones sits on a weight bench at Workout Anytime gym in Ridgeland. Jones is projected as a mid-round pick in this weekend’s NFL draft, and should become the first JSU player selected in the draft since 2008. (Ernest Bowker/The Vicksburg Post)

RIDGELAND — When he received an invitation to play in the East-West Shrine Game, one of college football’s most prestigious all-star games, Javancy Jones figured his reputation might precede him.

Then he sat in a conference room for 3 1/2 hours, waiting for someone — anyone — associated with an NFL team to come talk to him. Nearly every other player in the room got an interview while Jones sat there. It was then and there, he said, that he had a revelation.

“It was up to me to make them want to talk to me,” Jones said, and that’s exactly what he did.

The Jackson State linebacker impressed scouts with an outstanding week of practice and capped it by making four tackles, one for loss, for the East team in a 10-3 loss to the West. He continued to make scouts swoon by bench pressing 225 pounds 29 times and running a 4.5-second 40-yard dash at his pro day in March.

Now, his phone won’t stop ringing. More than 20 teams have contacted Jones and his agent ahead of this weekend’s NFL draft. Jones is expected to be a mid-round pick after barely being on anyone’s draft board three months ago.

Not too shabby for a small-town kid from Macon, Mississippi.

“It was a feeling of relief,” Jones said of seeing his name pop up in draft discussions in recent weeks. “I had an amazing career at Jackson State and was still an unknown. I wasn’t even a sleeper. It’s crazy how one game against good competition can open people’s eyes up.”

Jones was recruited by Duke, Vanderbilt and Kentucky coming out of Noxubee County High School in 2013. He signed with Jackson State because of his mother. She was very sick, his older brother was already at Jackson State, and going there allowed him to stay close to home and family.

He had a stellar career at JSU, capped with All-America honors from BOXTOROW and STATS this season. He had 82 tackles, 4 ½ sacks and 19 ½ tackles for loss in 2016, started all four seasons, and played every defensive line and linebacker position. When it was all said and done, he was one of the most decorated defensive players in Jackson State’s storied history.

It took a lucky break, though, to finally gain recognition on a bigger stage. He was originally an alternate for the East-West Shrine Game, but got a call to play in the game at the last minute. Those lonely hours in a conference room made him realize it was a huge opportunity he had to seize.

“Somebody got sick or hurt, and I got called in a couple of hours before practice started,” Jones said. “To do the things I did there was a blessing and an eye-opener to a lot of people.”

Once the NFL scouts started doing their homework on Jones, they obviously liked what they saw — a versatile, mature and grounded player.

“I played every position on the front seven, and in every defense there was,” the 6-foot-2, 245-pound Jones said. “They see these things, and to put up the numbers I put up even with changing head coaches and coordinators a couple of times, they see me being able to adapt and be versatile.”

It’s unclear where Jones will go in the draft. As a projected mid-round selection, when picks are traded like football cards, and with so many teams showing some level of interest, there only seem to be two things that are certain: Jones will be the first Jackson State player picked in the draft since wide receiver Jaymar Johnson in 2008, and this will be one terrific weekend for him.

On Friday night or Saturday afternoon he’ll realize every football player’s dream by hearing his name called in the NFL draft. He’ll also walk across the stage as a college graduate.

Jones will graduate from JSU on Saturday with a bachelor’s degree in early childhood education.

He readily admits which one is a bigger accomplishment.

“I graduate Saturday, so that’s the biggest thing on my mind,” Jones said. “Where I’m from, a lot of people don’t make it out. For me to get my education and my degree, it lets me know I can make it with or without the football.”