Vikings dive into second round 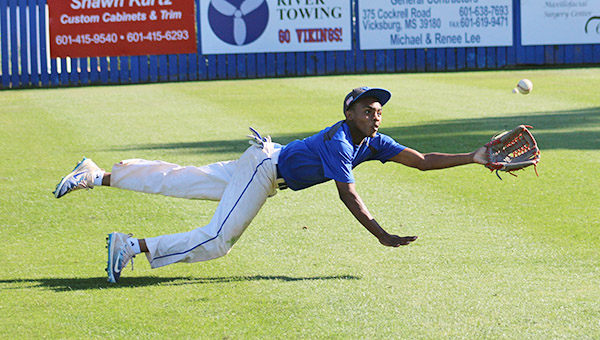 Warren Central outfielder P.J. Mims dives to catch a fly ball during batting practice on Tuesday. Warren Central will play Tupelo in the second round of the Class 6A playoffs beginning Friday night in Tupelo. (Ernest Bowker/The Vicksburg Post)

Having gotten its feet wet with a relatively easy first-round sweep, Warren Central is about to jump into the deep end of the playoff pool — or, to be more precise, into the Wave.

The Vikings (17-13) will hit the road to face Tupelo (18-8) Thursday night in Game 1 of a second-round MHSAA Class 6A baseball playoff series. Game 2 will be Friday at 7 p.m. at Warren Central. The series schedule was moved up one day because of the threat of severe weather across Mississippi this weekend.

The Golden Wave represents a major step up in competition for Warren Central from first-round opponent Callaway. Where last week the Vikings were facing a struggling team that had won twice all season, they’ll now be facing a division champion that’s at least on their own level.

It’s a bigger challenge, but one Warren Central coach Conner Douglas said he and his team have prepared for all season long.

“The way we built our schedule, this is what it’s for. It’s to get us ready for the playoffs,” Douglas said. “We’ve seen good arm after good arm all year. Just about every game we’ve seen somebody’s best pitcher or their No. 2. This series will be nothing we haven’t seen. We’re ready for it.”

Warren Central and Tupelo are both playoff regulars, but have not faced other in at least a decade. Their only common opponent this season is Madison Central, which beat both teams.

If it’s hard to find some common ground to compare the teams, a look at the stats indicates pitching will be a key for both.

Tupelo has a team ERA of 1.92 thanks to starting pitchers Charlie Greer and Jackson Bridges. The duo has 11 of the Golden Wave’s 18 victories and allowed just 15 earned runs in 91 total innings combined. Bridges has 58 strikeouts in 49 innings, and Greer has 54 in 42 innings.

“They’ve got a good squad,” Douglas said. “They’ve got several junior college signees and good arms. They’ve got some young guys that are Division I talents and won their division convincingly. It should be a good matchup for us.”

While Tupelo is relying on Greer and Bridges to carry the pitching load, Warren Central is bringing a plethora of arms to bear. Seven pitchers have thrown at least 15 innings this season, and 10 have made at least two appearances on the mound.

The depth of the staff has been both an asset and a dilemma for Douglas. As late as Wednesday he wasn’t settled on which pitchers he’d start in each game, but the sheer number of available arms gives him plenty of options and combinations. Douglas has constantly shuffled his rotation throughout the season based on matchups and effectiveness and said he has no plans to change that approach in the middle of the postseason.

“If it ain’t broke, don’t fix it,” he said. “The way we’ve pitched guys this year has not been why we’ve lost ballgames. It’s making an error or not getting hits when we need them. The pitching has been good.”

No matter which direction Douglas goes in, there seems to be at least one pitcher certain to get a start.

Christian Oakes has allowed just one earned run in 30 2/3 innings, good for a ridiculously low 0.23 ERA. He’s walked six batters and struck out 33. The junior right-hander spent most of the season as a reliever but has recently been moved into the starting rotation.

Oakes is a prime example of the Vikings’ amoeba-like approach to pitching in a new era of limited pitch counts, where the depth of a staff is as important as its quality. The emergence of he and some of his other teammates like Logan Stewart, Caleb Sterling and Vantrel Reed — none of whom were on the radar as aces before the season — has allowed Douglas to keep almost all of his pitchers fresh and other pitchers to rest injuries or work through slumps, all while the Vikings have kept racking up wins.

“It was just something that happened with these guys. You had seven guys that came in and could pitch. We trust the guy that’s out there as much as we trust the next six. It’s definitely a luxury for us with the pitch counts,” Douglas said. “A lot of teams have about three guys that eat up all their innings. You can’t look at our roster and say, ‘That’s our ace.’”