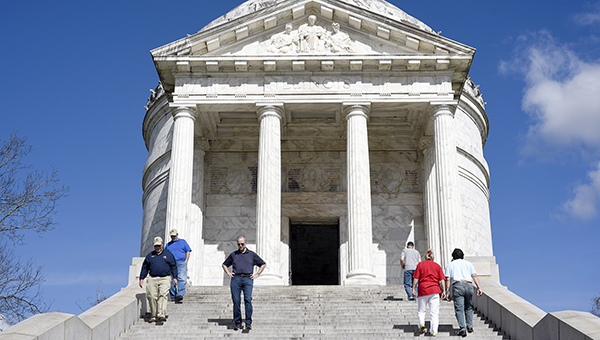 Visitors to the Vicksburg National Military Park walk on the steps of the Illinois Monument. The VNMP will remain open if there is a government shutdown. (Courtland Wells/Vicksburg Post)

All eyes on D.C. as lawmakers work to avoid government shutdown

As Congress continues working toward an agreement on a continuing resolution to avoid the second government shutdown in four years, officials at local federal agencies are looking at contingency plans in case the order comes to close up shop.

A continuing resolution is a joint resolution approved by Congress when a fiscal year is about to begin or has begun, to allow federal agencies and programs to continue to operate at current funding levels through a fiscal year until a budget or appropriations for the rest of the fiscal year are set, and must be approved by both houses of Congress and signed by the president.

The present resolution expires midnight Friday. Approving a new resolution would extend temporary funding until May 5.

“We went through this in 2013, so we have our plans ready,” said Greg Raimondo, public affairs director for the U.S. Army Corps of Engineers Vicksburg District.

If the shutdown order comes, he said, employees will report to work as usual Monday, and officials will then notify employees about the shutdown.

He said campers at the Corps’ parks and campgrounds will be notified the grounds are closing. Normally, he said, people receive two days’ notice to leave to give them time to get packed.

“It’s (shutting down the campgrounds) pretty standard procedure. We really figured it out well in 2013. The managers know what to do. We’ve given out guidance this afternoon to our management teams; they’ll know what actions they need to start taking.”

“Like all the government agencies, we had to maintain updated procedures for an orderly government shutdown,” said Michael Petersen, a spokesman for the U.S. Army Engineer Research and Development Center, adding ERDC went through the 2013 shutdown and has kept plans to make sure the shutdown is done in an orderly fashion.

“We have mission critical folks who would stay on board and we would have make sure security and safety are still maintained,” he said.

The manager for one contractor to the Corps said his company will continue its work.

“From what we’re hearing from the customer, they said it won’t impact us at this point,” said Bowhead program manager Don Sloan.
National Military Park impact

Vicksburg National Military Park Superintendent Bill Justice said park officials have not received any guidance on closing the park from the National Park Service if a shutdown occurs.

“I am sure that if a shutdown were to happen, we will get guidance for that,” he said.

The park, like other parks and attractions under the National Park Service, was forced to shutdown in 2013.

“What generally happens during a government shutdown in a National Park or during any break of appropriations is the park is closed for access to the public,” Justice said.

Bill Seratt, executive director of the Vicksburg Convention and Visitors Bureau said the military park is the top attraction to get people to come to Vicksburg and get off the Interstate 20.

“So many people that visit that National Military Park visit our other attractions and eat and buy gas and stay in hotels,” he said. “If they don’t have the reason to come here for the park, then we could potentially miss all of that business. I can’t give you an exact number, but we felt a very definite crunch on business throughout the market with that 16-day shutdown.”

Because of the federal activities at all the federal facilities in Vicksburg, a government shutdown would just be devastating for this entire market, Seratt said.

“Most of the riverboats sell the Vicksburg National Military Park as an add-on. For some of the boats, that is their number one selling land-based activity,” he said. “If they had to cancel all of that it would be a great impact on their business because they would not be selling those add-ons, and our licensed park guides would be missing tours because the park was closed.

“There would still be other activities with the museums and tour homes in town, but the big explanation point to the stop in Vicksburg in the National Military Park. It would be devastating to the whole tourism experience in Vicksburg. We know that the park drives traffic here and it is the attractor that many of the smaller attractions orbit around.”

– Reporters Brandon O’Connor and John Surratt combined for this article.

It is official. King Robbie Shakespeare has been crowned. Thanks to the support of voters through three competitive rounds of... read more