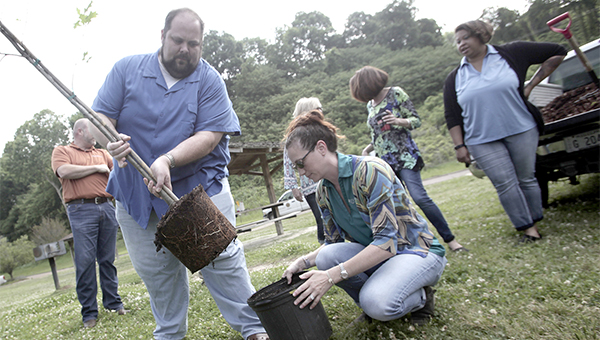 Mike Woods and Ginny Tzotzolas with Riverwalk Casino Hotel help plant a Nuttall Oak tree donated to the City of Vicksburg at Riverfront Park in Honor of Arbor Day Friday. Arbor Day is a holiday were individuals are encourages to care for trees. (Courtland Wells/Vicksburg Post)

Riverfront Park has a new resident.

Employees from Riverwalk Casino with an assist from city landscape department employees planted a nuttall oak in the park in observance of Arbor Day.

“This began because we wanted to plant a tree for Arbor Day,” Ginny Tzotzolas, Riverwalk general manager. “This is our second year to donate a tree to the city and plant a tree on our property. Last year, we planted a tree at Catfish Row; we like to do some good projects for the community.

“I bring my daughter and son out here a lot to play,” she said. “So now we can all come out here and watch this tree grow as a family.”

According to the website Arbor-day.net, the first Arbor Day occurred April 10, 1872, in Nebraska. The observance was the idea of Julius Sterling Morton, a Michigan native who moved to Nebraska, where he was journalist and politician.

Morton worked to improve agricultural techniques in Nebraska and the United States, and served as President Grover Cleveland’s Secretary of Agriculture.

President Richard Nixon in 1970 proclaimed the last Friday in April as National Arbor Day, and the observance, which involves planting trees in honor of the day, is now celebrated in other countries across the world, including Australia.

Exhibit to open at Firehouse Gallery