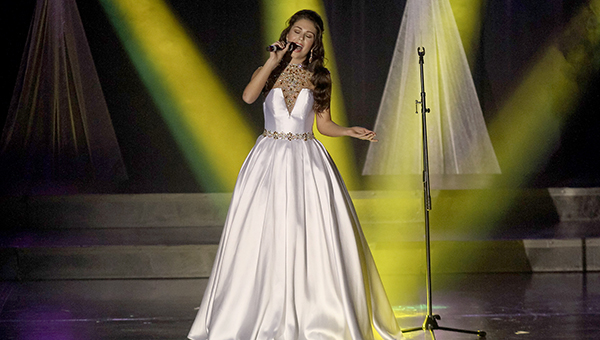 The 2017 Miss Mississippi’s Outstanding Teen pageant got underway Saturday afternoon at the Vicksburg City Auditorium. Three preliminary winners were named at the 13th installment of the teen pageant with a tie in one of the competition categories.

“This song moved me the first time I heard it, Holmes said, because of its message.

Holmes, who is the daughter of Derek and Penny Holmes, said she has grown up singing and is currently a member of two choirs at her high school — the Colla Voce Choir and Arrows 401, which is an all women’s acapella group.

This is Holmes’ first year to compete in the teen pageant, but not the first time she has thought about vying for the title.

“This has always been a dream of mine, and this year I made the time to do it,” she said.

Brand is daughter of Barry and Connie Brand of Meridian.

The 16-year-old wore a red evening gown for the competition.

“I had already purchased a gown for the competition, and when I went back to the store to get a talent dress, my mom found this evening gown. She told me to try it on. I didn’t want to, but I did and when I put it on, we both loved it.”

For the on-stage question portion of the competition, Brand said her heart was beating really fast, but felt like she did a good job.

“When she asked me about texting and driving, I felt comfortable and was happy with my questions,” Brand said.

Jackson, who is the daughter of Danny and Tori Jackson of Mize wore a pink gown for the eveningwear competition.

“My favorite color has always been light pink and when I found this dress with the green and blue stones on it, I knew right away when I tried it on I wanted to wear it in the competition,” she said.

This is Jackson’s second time to compete in the Miss Mississippi’s Outstanding Teen Pageant, she said.

The 14-year-old’s platform is Matchbook, she said, and it is focused on getting young children to like reading.