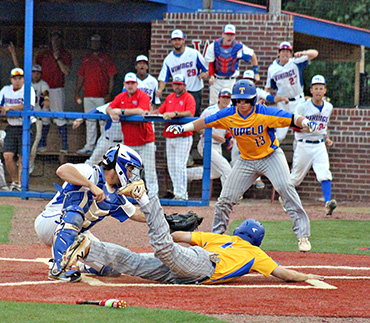 Tupelo’s Tanner Jaggers ripped a line drive that seemed headed for the outfield grass when Warren Central shortstop Vantrel Reed jumped high in the air to snag it for the first out of the seventh inning.

It was a highlight to remember.

If only the Vikings could forget what unfolded over the next hour.

Tupelo ripped off three straight singles, then tied the game with a walk and a hit batter. In the eighth inning, a two-out error kicked off a rally that resulted in one run and a 3-2 victory for the Golden Wave that ended

Warren Central’s season in Game 2 of a second-round Class 6A playoff series at Viking Field.

“It’s rough to lose a game like that, especially for the way the kids fought. Every one of them were in the game. We were about out of options on everything, because we were using everybody. They kept competing and competing,” Warren Central coach Conner Douglas said. “I don’t know how the ball could roll the other way every time and us not catch a break. I don’t think we caught one all night when it came down to something that mattered. It’s baseball. It’s not fair to these seniors, for as tough as they worked for five years and as tough as they fought, it’s going to be tough to swallow for a while. It sucks.”

Tupelo (20-8) swept the best-of-three series in two games and advanced to face DeSoto Central in the Class 6A quarterfinals next week.

Warren Central (17-15) was eliminated in the second round of the playoffs for the third time in four seasons. The final defeat was, perhaps, a fitting way to end a difficult up-and-down season in which the Vikings had a 2-7 record in games decided by one or two runs.

“Out of all our losses, so many times we’ve been one hit or one play away. But it’s part of the game, and I know these guys will learn from it,” Douglas said.

Although Tupelo swept the series, both games were decided by razor thin margins on plays that didn’t always show up in the box score. Warren Central hit a number of balls hard in both games, like the deep line drive off the bat of Landon Stewart in the bottom of the seventh inning in Game 2.

With speedy leadoff man D.J. Lewis on first base, Stewart crushed a ball toward the gap in left center field. LaBryant Siddell caught it on a dead run with his back nearly to home plate for the second out of the inning. Lewis might have scored the winning run had it fallen in, but instead had to hustle back to first base and wound up stranded there.

The Vikings also got the benefit of a couple of close plays. Left fielder Hank Holdiness threw a Tupelo runner out at the plate in the second inning and then scored from second on a hit by Lewis in the third, sliding in a fraction of a second ahead of the tag at the plate to give WC a 1-0 lead.

They added another run in the sixth inning on an RBI single by Tyler McRight, but wound up leaving runners at second and third. It was a costly missed opportunity.

After Reed’s leaping grab to start the seventh inning, the Golden Wave loaded the bases with three straight singles off of tiring WC starter Christian Oakes. Oakes scattered nine hits and only walked one batter in 6 1/3 innings, but hit the wall in the seventh.

“I guess I got tired and they’d seen me three or four times at the plate already. They started hitting me. Can’t really do much about it,” said Oakes, who had only given up one earned run all season coming into Friday’s game. “It started sliding away. I knew I couldn’t do anything about it. I just had to get back up there and start throwing more strikes and see if I could keep it going.”

Oakes left the game to a loud ovation from the crowd and a hearty round of congratulations from his teammates. He was replaced by Farmer Abendroth.

The hard-throwing right-hander walked the first batter he faced and hit the second on a 1-2 count to force in two runs and tie the game at 2. Abendroth was then pulled for Logan Stewart, who got out of the jam — thanks in part to a nifty sliding grab by Holdiness in shallow left field to prevent a hit and another run.

“We did a good job of getting out of the inning and keeping it tied up. Logan did a great job,” Douglas said. “You just tip your hat to (Tupelo). They found a way to win at the end.”

After Warren Central’s missed chance in the bottom of the seventh, Logan Stewart quickly retired the first two batters in the eighth and got No. 9 hitter Gatlin Farrar to hit a chopper to first.

In one of those telltale moments that defined this season, the ball took a bad hop off the edge of the infield grass and bounced off the chest of first baseman Matthew Newcomb. Farrar was safe and the next batter, Ray Sandroni, walked. Josh Smith followed with a bouncer through the right side of the infield on a two-strike pitch that scored Farrar and gave Tupelo a 3-2 lead.

Stewart struck out the next batter to end the inning and the Vikings went back to work in the bottom of the eighth. They got the tying run on base thanks to a one-out single by Caleb Sterling, but couldn’t advance the runner. Tupelo pitcher South Sanders coaxed two ground balls to the right side of the infield to prevent a rally from forming and end the game and the series.

“You preach to your kids, and I know that sounds generic, but we told them to keep fighting. When we got out of the jam (in the sixth), we told them we’ve got a chance. We were getting guys on and we just weren’t scoring them,” Tupelo coach Justin Reed said. “And then (WC was) squaring balls up, too. It was just a great baseball game. You hate that anybody had to lose.”

STARKVILLE — In a showdown between ace pitchers in the Southeastern Conference, Mississippi State’s Konnor Pilkington and his bullpen reigned... read more