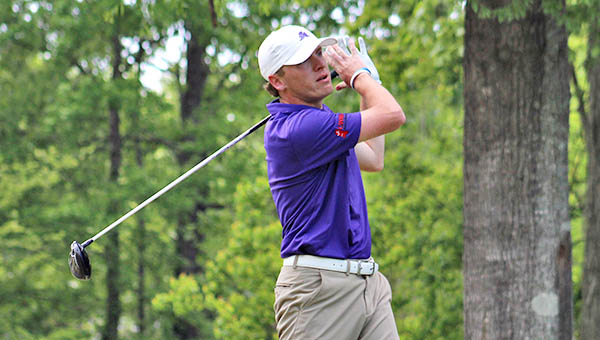 Local golfers planning to take the day off to go golfing early this week will need to reschedule or at least can sleep in. Both of Warren County’s golf courses are going to be packed with some of the best high school players in Mississippi.

Vicksburg Country Club will host the MAIS Class AAA North State tournament on Monday, while Clear Creek Golf Course in Bovina will be the site of the MHSAA Class III girls state tournament Monday and Tuesday.

It’s a showcase for the area’s courses and a couple of its golfers. St. Aloysius senior Channing Curtis is one of the favorites to win the MAIS tournament, while Warren Central junior Karley Whittington is trying to win her third individual state championship in five years.

“It’s pretty fun. You get to see the talent come to areas where you always play, and it’s not every day that everybody comes to your home course. And it’s fun to see them play in Vicksburg, which is somewhere a lot of junior golfers don’t go very often,” said Curtis, one of Mississippi’s top junior players. “I grew up playing with a lot of these guys. It’ll be fun to see how they’ll play the course I’ve been playing all my life.”

Playing on their respective home courses provides a comfort level and an advantage for the Warren County players. Both of Whittington’s state titles came at Clear Creek, in 2014 and 2015. Warren Central also won the team title in Class III in 2014.

Class III is comprised of schools that are classified as 5A and 6A in other sports with more team participation.
Both Whittington and the Lady Vikes are expected to contend for championships this week. Whittington’s main competition for the individual title figures to be D’Iberville junior Hannah Levi, the defending state champ, a Mississippi State commit, and a frequent rival to Whittington on the state’s junior circuit.

“I know she’s going to be the person to beat,” Whittington said. “We’re always back and forth. I know I can beat her and she knows she can beat me. It’s motivation knowing that I’m not the top dog this year, that I can chase after her.”

While the attention will be focused on the duel between Whittington and Levi, Warren Central’s team title hopes will hinge largely on two less-heralded players.

Mia Wamsley and Sydney Stuart round out the roster. Neither player is expected to contend for the individual crown. In last week’s Region 3 meet at Clear Creek Wamsley shot a career-best 94 and Stuart a 100, which was one stroke off of her best round there.

It’s the top two scores for each team, however, that count for the team score. So if either Wamsley or Stuart can shoot in the low 90s and pair with a round in the 60s or 70s from Whittington, the Lady Vikes should have an excellent chance to contend for the team title.

Back at the Vicksburg Country Club, St. Al’s boys’ team will try to take a similar path to victory. The Flashes have a state title contender in Curtis, and then several other golfers who have been up and down throughout the season.

How the rest of the roster performs, even if it’s just dropping a few strokes, could be the difference between raising a trophy or not. Curtis estimated that a score of between 310 and 320 — the top four golfers count toward the team score in boys tournaments — will put the Flashes in contention.

St. Al had a team score of 333 at their last tournament at VCC two weeks ago. Curtis shot a 75 and won the tournament in a playoff. Wilson Palmertree shot a 77 and finished in a tie for fourth, but the next-lowest score was Brandon Teller with a 90.

While they’d obviously like to win on their home course, the more important goal for the Flashes is simply to qualify for the MAIS Class AAA state tournament. The top four teams and top four individuals whose teams haven’t made it move on to the state tournament May 9 at Hattiesburg Country Club.

There’s some margin for error, but Curtis said it’s slim.

“I think we’re going to qualify, but you never know. One bad day for us and one good day for somebody else can change that. With it being a one-day tournament, it comes down to who has a better day,” Curtis said. “It’s going to be a tight one. Last year we lost North State by 12 strokes, which isn’t a lot, and came in third and beat the fourth-place team by a stroke.”

Individually, Curtis has the same philosophy. He’s won three of the four high school tournaments he’s played this season, but two victories were in playoffs — including the WC Invitational at Vicksburg Country Club two weeks ago.

“One putt doesn’t drop here or there and it’s an entirely different ballgame,” Curtis said. “Every shot matters. Even the shortest little putts.”