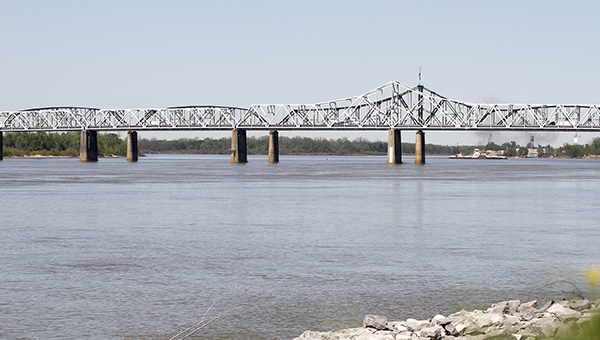 The National Weather Service expects the Mississippi River to crest above flood stage by mid-May. Some areas in Warren County could experience flooding as the river approaches 43 feet.

Some areas of Vicksburg and northern Warren County could see flooding as the Mississippi River is expected to crest above flood stage by mid-May, according to forecasts from the National Weather Service.

Vicksburg and northern Warren County experienced severe flooding in December 2015 and January 2016 when a swollen Mississippi River crested at 50.23 feet on Jan. 15, 2016, according to National Weather Service records.

The catalyst for the flooding is a storm system expected to produce heavy rain in Arkansas and over sections of the upper Mississippi Basin.

“Last week we were looking at the western half of Arkansas, which goes into the Arkansas River,” said Marty Pope, hydrologist for the National Weather Service office in Jackson. “That area got what looked like 5 to 7 inches of rainfall. It didn’t get as heavy into the southern parts of Missouri as it did here (Vicksburg). They only showed 3 to 5 inches.”

Presently, he said, forecasters are looking at a three-day forecast of 7 to 9 inches across an area from eastern Oklahoma through northwest Arkansas, southeast Missouri and into Illinois, “So it’s going to bring a lot of stuff across the area.”

The continuous heavy rain is expected to increase river levels, with a 49-foot crest at Cairo, Ill., on May 6, and a crest of about 44.5 feet at Vicksburg on May 16 — about a foot-and-a-half above flood the area’s 43-foot flood stage.

“One of the good things is they have storage at the Barton, Ky., dam,” Pope said. “That’s going to be fairly significant for us as that crest comes into there; they maybe able to chop some it out. There’s hope right now.

“All this is based upon forecast rainfall; initially, it was a two-day rainfall, but now it’s extended to three days, so the rainfall of three days will push it (the river level) up eight feet. We’re going to see a pretty good little chunk of water come in and move on out from the Arkansas River before the (Mississippi’s) crest comes down.”

“The river will be rising and continue to rise, given all this rain that’s going to be up north,” said Greg Raimondo, public affairs director for the U.S. Army Corps of Engineers Vicksburg District. “We’re going to get some rain here, but not with the impact from what we’re getting from up north.”

And that means some low areas along the river will get wet for the second time in 17 months.

According to the National Weather Service the following areas will be impacted as the water rises.

• Areas in Vicksburg and the county will become affected from high water when the Mississippi reaches 35 feet, flooding several thousand acres of farm, agricultural, and bottom land flood.

Hunting camps and forested land will begin to flood in the Yazoo Backwater Area north of Vicksburg.

The biggest impact will felt by the area’s farmers, Pope said.

Because the weather has been for the most part dry and temperatures began warming up early,” he said, “Everybody’s planted in area that would probably be flooded. So that’s probably the most significant to compared to what we had last January, (but) that was probably much worse. I think we’re going to get a lot of damage just from the agricultural loses.”

The one good thing is we’ve got some time to prepare and we will work with the city on any closures that need to be made,” Raimondo said.

Riverfront Park has a new resident. Employees from Riverwalk Casino with an assist from city landscape department employees planted a... read more