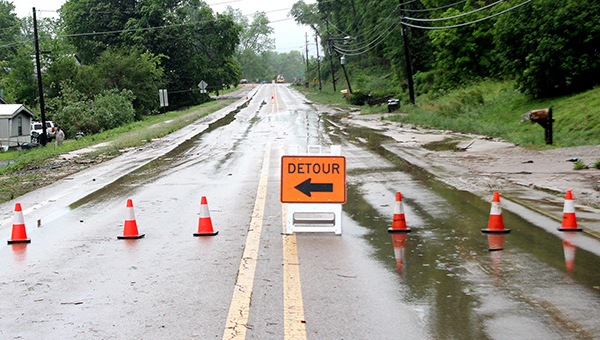 North Washington Street was closed Sunday after mud covered the road following a severe storm raced through the area. The worst of the power outages were also reported in this area. (John Surratt / The Vicksburg Post)

He said the area went through three tornado warnings as the system moved across Louisiana and into Warren County. He said the area had a few downed trees and no structural damage except an overturned shed on Oak Street.

The storm, however, knocked out power to residents in downtown Vicksburg, North Washington from Main Street to U.S. 61 North, Chickasaw Road and Long Lake Road.

“Each had a debris signature, meaning each one touched down somewhere. One was in Delta (La.), and came into the area around the Yazoo (diversion canal) and Kings. Another was (Mississippi) 27 South in Claiborne County that went into southeast Warren County and then into Hinds County.

The third was in Flowers at I-20 that went into northeast Warren County and then into southeast Yazoo County.”

“I heard that train sound,” said Willie Rankin, who lives on Hutson Street in Kings. “It came right through here and they that way (pointing to a downed tree on the west side of Hutson).”

He said the storm hit about 7 a.m. his mobile home did not move during the storm. “It was secured good and God was watching over us,” he said. “I told my wife, ‘We’ve got no place to go, so we might as well hold on and pray to God.”

“Entergy has come and made their assessment, and the plat is operating off a generator,” he said. “The water tanks are not empty, but we are working with only one well.”

Besides the wind damage, the storm caused mud slides on North Washington Street and in Kings, and a rain-swollen drainage ditch pushed mud and debris, including logs on Hutson Street and the Kansas City Southern railroad tracks.

“It just came over the banks and threw all that junk on the bridge and the road,” said Michael King, who lives by the ditch. He said he did not hear the tornado when it passed, “Because the rain was so loud on my roof. The wind and the rain hit about the same time.”

The slide and the flooding, Elfer said, caused forced city officials to close North Washington Street to commercial traffic and Kansas City Southern to shut down operations until the tracks were cleared.