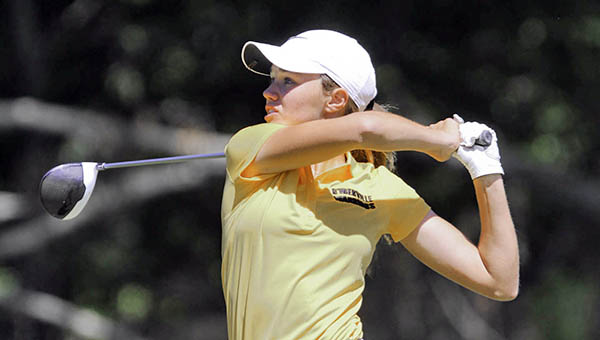 D’Iberville’s Hannah Levi hits a tee shot during the first round of the MHSAA Class III girls state golf tournament Monday at Clear Creek Golf Course. Levi shot a course-record 65 to take a four-shot lead into the final round on Tuesday. (Paul Ingram/For The Vicksburg Post)

Hannah Levi was even better.

And now, to bring home a couple of state championships, Whittington and her Warren Central teammates are going to have to be at their very best.

Levi shot a course record 65 — breaking by one stroke the mark Whittington set two years ago — to take a four-shot lead over her rival and give D’Iberville the lead in the team standings at the MHSAA Class III girls state golf tournament Monday at Clear Creek Golf Course.

Whittington shot a 3-under par 69 to set up Tuesday’s second round as a de facto match play showdown for the title. Tupelo’s Michaela Bryan was a distant third after carding a 78 and was the only other golfer to break 80 on Monday.

The second round will begin at 9 a.m. The three leaders will tee off in the final group at 10:50 a.m.

“I know I left a lot of putts out there, but it’s hard to sleep on the lead. I know that personally. But I think I set myself up OK for tomorrow. I can go at it with everything. I have nothing to lose,” said Whittington, who won the Class III individual state title in 2014 and 2015. “I’m going to definitely go to break my record, which is 66. That’s an amazing score, but I think it can be beaten. I don’t think it puts me out of it all the way.”

Thanks to Levi’s record-setting performance, D’Iberville also had the lead in the team standings. Levi’s round paired with a 92 by Hassen Dorsey for a team score of 157. That was seven shots ahead of Tupelo and nine better than Warren Central.

After Whittington, Sydney Stuart shot a 97 for Warren Central and Mia Wamsley a 102. Wamsley said the Lady Vikes will need to improve on those scores a bit to give them a shot at their second team state championship in four years. They also won it in 2014.

“We need to be in the lower 90s. We could have shot a lot better. I totally screwed up on the first hole, which is really bad,” Wamsley said. “But we still have a chance to win because they’re only beating us by about 10 strokes, which is basically nothing. Tomorrow their girls could shoot way worse than they did today, so we still have a chance I think.”

While the Warren Central-D’Iberville-Tupelo race plays out as the undercard Tuesday, the main event will be round two of the head-to-head duel between Levi and Whittington. The two high school juniors are frequent rivals on Mississippi’s junior golf circuit, and Monday was a worthy chapter in their long-running rivalry.

Whittington made four birdies and only one bogey during the first round. Levi made seven birdies — including on all four of Clear Creek’s par-5 holes — and no bogeys.

Levi also sank birdie putts on Nos. 17 and 18 to break Whittington’s course record and keep up the pressure going into Tuesday.

“It was pretty good. I made the par putts where I needed to, I was getting up and down when I left a putt short or something, I birdied all four par-5s and just made a couple extra birdie putts,” said Levi, who has committed to play at Mississippi State. “I had two putts on 17 and 18, so I was just trying to get it as low as I could. I knew a 65 was a good number, and if I made those two extra birdie putts on the last hole it’d be fine.”

Whittington said she missed several medium-length putts that could have drawn her closer, but was happy with her round.

Although she’s behind heading into round two, Whittington was also satisfied that she’s still within striking distance — and, it seemed, to be the hunter instead of the hunted. A four-shot margin is imposing, but can easily disappear within a couple of holes if Whittington can start strong and take advantage of a mistake or two by Levi.

Of course, Levi has to make a mistake for that door to open.

“I think the pressure is more on her because she has to hold the spot and I can just chase. I don’t think anybody else shot below 80, so I have nothing to lose. There might be one more girl, but other than that I don’t see anybody else,” Whittington said. “It’s going to help being in the same group knowing if she made birdie, I need to make birdie too just to not drop a shot.”

No arrests yet in Monday shooting