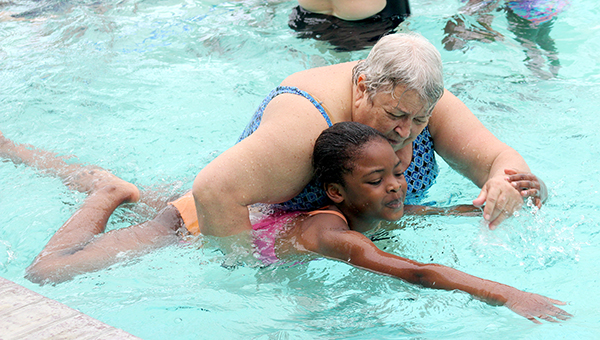 The students jumped and played going underwater with reckless abandon and no fear.

Just days before that would have been unthinkable, but thanks to a collaborative effort called SPLASH, which stands for Schools Practicing Life Altering Swim Habits, the students had conquered their fear of the water and learned the basic skills needed to be safe when swimming.

SPLASH was created by Vicksburg Swim Association head coach Mathew Mixon and is a cooperative effort between the Vicksburg YMCA, Vicksburg Warren School District, the City of Vicksburg and Vicksburg Catholic Schools to teach second graders how to swim.

“It is life changing,” Mixon said. “The opportunities are unlimited now. I was proud so many of them conquered a big fear of just getting in the water and going under. It was huge fear for the majority of them.”

The pilot program included students from Sherman Avenue Elementary School, St. Francis Xavier Elementary and Dana Road Elementary. The program was designed with the plan to eventually expand it to every elementary school in Warren County.

Students receive a 30 minutes class each day for a week now and then will return for five more days in the fall when they start third grade.

“It is a whole new world for them,” Mixon said. “It was hard to just get them out of the pool. Everyday I came in I was very humbled and excited because they were very excited about learning.”

Mixon said that at the start of the week, 69 of the 103-second graders from Sherman Avenue were designated as beginner swimmers meaning they weren’t even comfortable putting their face underwater. At the end of the week, they were floating on their backs, playing in the water and going under without a care in the world.

“We swimmed and practiced new swimming techniques and my teacher taught us the new techniques,” second grader Jalen Dates said. “I hope it makes me better so I’ll be able to swim on the deep side one day.”

The goal of the program is to teach the students a life saving skill and encourage them to continue to improve as swimmers.

“Drowning is the number one or number two cause of death in young children. We are on the Mississippi River, we’ve got lakes everywhere,” YMCA executive director Phillip Doiron said. “We think it’s important to teach that, and not just teach the skill, but give these kids a sense of accomplishment that they can overcome a challenge.”

The SPLASH classes provide an introduction to swimming, but Mixon said he encourages the students to talk to their parents about enrolling in additional swimming classes.

The annual Learn to Swim program will have registration May 17-20 at City Pool from 10 a.m. to 1 p.m. The program costs $12 and is open to all ages. The classes will be held in June and July.

The Vicksburg YMCA also offers year-round swim classes. They cost $40 for non-members and $60 for members.

Stirguses to be honored by Vicksburg’s FCA

Jim and Ann Stirgus have spent their entire lives nourishing, teaching and caring for the youth of Vicksburg. Their work... read more