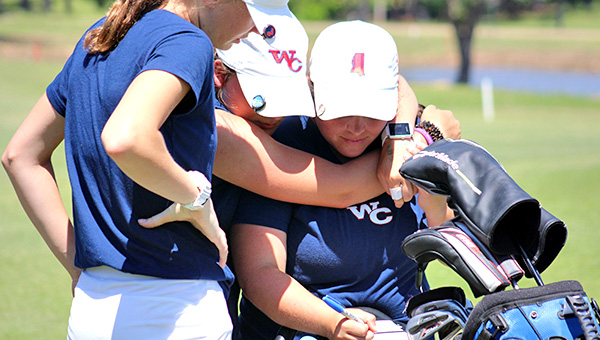 By the time she stepped to the 18th tee Tuesday afternoon, Hannah Levi had a big enough lead that she could have re-enacted the final scene from “Tin Cup” and still won the MHSAA Class III girls state golf tournament.

And, when she dunked her tee shot into the water, it was at least possible her lead might sink to the bottom of the pond alongside her ball. Everyone that had spent the past two days watching her — and especially those that had been trying to catch her — knew better.

The D’Iberville junior took a drop and a deep breath, and calmly knocked her shot within 10 feet of the pin. A few minutes later she rolled home a par-saving putt that curled around the edge of the cup before dropping in to provide a rare moment of drama in a tournament Levi had drained it of with her machinelike precision.

Levi followed up her course-record 65 in the first round with a 68 Tuesday for a two-day total of 133, beating Warren Central’s Karley Whittington by seven shots to win her second consecutive Class III individual state championship at Clear Creek Golf Course.

“I wasn’t about to shoot 69. I really wanted to come in with a 68. I’ve done it before where I hit the ball in the water and made par, so I just knew I had to hit a good second shot and put a good putt on it. If it fell, it fell, and if it didn’t so what?” Levi said. “I left a few shots on the course today, but overall that’s probably my lowest two-day round. I couldn’t have really asked for much more.”

Whittington posted two rounds under par — a 69 and a 71 — but never got within striking distance of the lead. Three bogeys on the front nine and three more on the back Tuesday didn’t help matters, but it was mostly Levi that made sure Whittington never got a chance to make a run.

Levi didn’t make a bogey until the 14th hole in round two, 32 holes into the 36-hole tournament. Whittington had a par on No. 14, a birdie on No. 15 and an eagle on 16 to make up three strokes in a three-hole span, but the tournament had long since been decided by then.

“I made six bogeys, so I didn’t help myself out. I had enough birdies and I had an eagle, but I couldn’t get over the bogeys,” said Whittington, who was the Class III champion in 2014 and 2015 but has now finished as the runner-up to Levi two years in a row. “I’m proud of my score. I just wish I could have done better.”

Levi started the day with a four-shot lead and birdied her first two holes to stretch it to five, even as Whittington birdied two of her first three holes and parred the other. Whittington then made three consecutive bogeys on Nos. 5, 6 and 7 to fall six shots behind at the turn, and dropped another shot when she parred No. 10 while Levi made birdie.

Whittington had another run of three straight bogeys on Nos. 11-13 and was 10 shots off the pace by the time she made her final charge. When Levi found the water on No. 18, the margin was still seven strokes. Both players made par on 18.

“Props to her. She hit a lot of good shots today and I just couldn’t ever get ahead of her. Every one that I birdied, she birdied too,” Whittington said. “Unless she just really screwed up, which I knew wasn’t going to happen, I just knew there was no way that I was going to beat her. I was pretty much worried about helping my team score.”

Tupelo’s Michaela Bryan was the third member of the final group, and finished with a two-day score of 154. She and the Golden Wave did manage to take home a great consolation prize, however, by snagging the team championship.

Tupelo totaled 321 shots to edge D’Iberville by a single stroke. Warren Central was third, with a score of 330. Tupelo overcame a seven-shot deficit to D’Iberville in the final round as Bryan shot a 76 and Margaret Hill a 71.
Hill totaled 167 for the tournament and finished fourth, 13 shots behind Bryan.

Bryan improved by two shots on her first-round score, while Hill was five shots better. The Golden Wave had finished in the top three in the team standings each of the previous three years.

Bryan, a senior, broke down in tears when the final scores were posted.

“We were all standing here and we knew it was going to be close. But seeing the number actually up there, and it being by one shot, just makes it more surreal,” Bryan said. “Because it’s been my senior year and we’ve been second or third up to this point, I’m over the moon right now. I don’t know how to describe it.”

For Warren Central, the result was disappointing even if the journey left its players with nothing to be ashamed of.

The Lady Vikes’ score would have been good enough to win on most days, but not when two talented opponents were both at the top of their games. Instead they settled for their fifth consecutive top-four finish in the state tournament.

“I told them if we were going to have a shot at this thing, we were going to have to get into the mid-160s or lower. District was 165, yesterday was 166, today 164. So they did their part,” Warren Central coach Matt Williams said. “They wanted it really bad, there’s no doubt about that. But you can’t hang your head posting three of your best scores all year when they really mattered the most.”