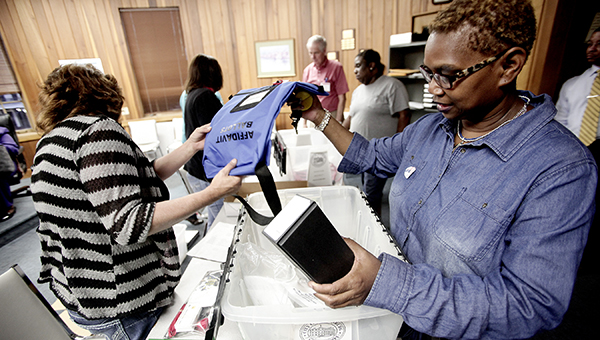 Selmon, Warren County’s District 3 supervisor and a candidate for mayor in 2005, and Dent both declined to comment about the election.

Dent, however, said he had some things to consider before he would announce whether he will support any of the remaining candidates in the general election.

At a victory party at The Hut, Flaggs thanked his campaign workers for their assistance in the race.

“I love every last one of you. Tell your friends I said, ‘Thanks,’ tell your relatives I said, ‘Thanks.’ Let’s keep going, let us stay together and let’s do it one more time, and let’s make certain that you hold me accountable.”

Flaggs said later he was glad to get the primary out of the way, adding, “I thank God I was able to get through it.”

“A primary is always tough. In local elections it’s always tougher because there’s more emotions because people are inclined to look at local issues. I didn’t know I was going to be blamed for so much,” he said, “but because of that, I’m going to do better and do the best I can.”

He called the race an educational experience.

“I take challenges as opportunities to perfect my self, and they (the other candidates) brought out some points like Kings. We’ve got to do more for Kings; I’m committed to doing more for Kings, but at the same time, we have to make certain we have to move this city forward and we have to have more accountability and oversight.”

“I am hoping that means that the citizens of the North Ward will take a real hard look at the numbers and realize that I’ve done my job,” Mayfield said. “There are some things that I want to do that I haven’t been able to for many different reasons. I think overall, the people realize that there are things that need to be done, there are things that need to be done different, there’s some things that we need to do more of. I think the people are looking at that and I hope that they will look at the whole nine yards and realize this board has been a progressive board.”

Mayfield has served as North Ward Alderman since 2005. He will face independent Troy Kimble in the general election on June 6.

Carroll congratulated Mayfield on the win and said that although the vote didn’t go his way, he was happy with the way the race was run.

“The primary of course didn’t go the way I wanted it to go, but we tried to run a clean race and a race that was going to be representative of who I am as an individual,” Carroll said. “I wish my opponent the best in the upcoming general election.”

He added that he hopes Mayfield and Kimble will keep the voters in the North Ward as the main focus of the election.

Mayfield said that when voters go to the polls June 6 he hopes they will take into account what the Board of Mayor and Aldermen has accomplished during the most recent term and all they have planned for the future.

“I feel good about what we’ve done to this point, but there’s always something in the back of your head that you feel you need to do more of. The citizens are watching closely and they want to see action. That’s what they pay us for. They pay us to improve the surroundings of Vicksburg, and that is what we’re trying to do.”

Mayfield said that if he is elected for another term, he hopes to focus on improving the infrastructure in the city and specifically the Kings community.

He added that he will continue to fight and work towards another term until the last vote is cast on election day.

He will face Republican challenger Alex Monsour, who currently serves as the District 54 State Representative, in the June 6 general election.

Democratic nominations in mayor, North Ward alderman up for grabs

City voters head to the polls Tuesday to cast ballots in four elections to select the Democratic Party nominees for... read more