Rebels use force to muscle past ULM 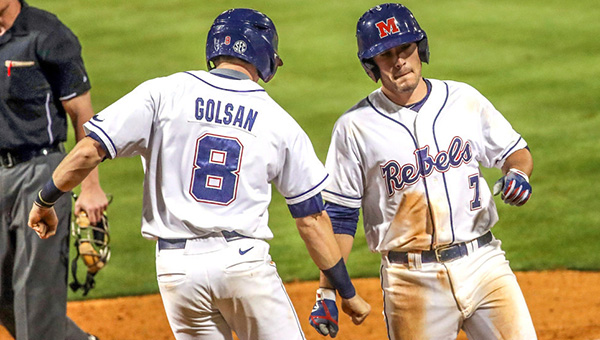 Ole Miss’ Nick Fortes (7) is greeted at home plate by teammate Will Golsan (8) after hitting his second home run of the game Tuesday against Louisiana-Monroe. Golsan had four hits and drove in six runs as the Rebels won 21-7. (Joshua McCoy/Ole Miss Athletics)

The Rebels mashed 17 hits and scored 18 unanswered runs in the last three innings to crush Louisiana-Monroe 21-7 on Tuesday.

It was the most runs Ole Miss has scored since 2009, and a season high for hits. Seven players had multi-hit games, led by Tate Blackman and Nick Fortes with three hits apiece.

Fortes went 3-for-5 with two home runs, six RBIs and four runs scored. Blackman was 3-for-4 with a triple and three runs scored.

“It was a lot of fun,” Fortes told The Oxford Eagle in a postgame interview. “With our team struggling a little bit in the month of March hitting the ball, it feels good to put 21 up. I think it boosts a lot of confidence, too, and helps us get going a little bit because sometimes you need games like this to get going.”

Ryan Olenek also hit a two-run home run for the Rebels (28-17), who scored five runs in the bottom of the fourth inning to take an 8-7 lead and then kept pouring it on.

Ole Miss batted around and scored four runs in the fifth inning, and then scored nine times in the sixth. Fortes homered twice in the sixth inning, a two-run shot early that made it 14-7 and then a three-run blast later on to make it 21-7.

Andy Pagnozzi pitched a scoreless seventh and the game ended after that because of college baseball’s mercy rule.

“We haven’t done that much,” Ole Miss coach Mike Bianco said. “We haven’t had a lot of those 9-7 games, 12-10 games. We think we have a good offense. We’ve talked about it. I think we’ve outhit our opponents eight out of the last nine games, so we’re certainly swinging it a lot better.”