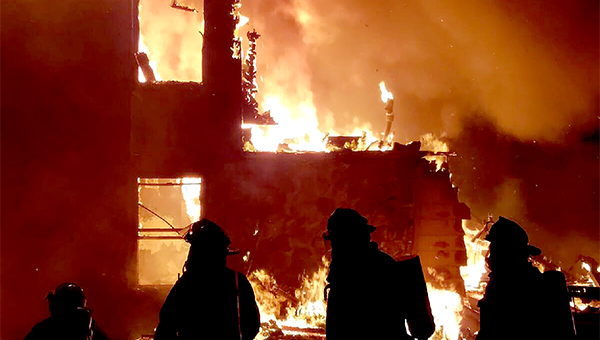 Another abandoned building at Whispering Woods destroyed by fire

The fire was the second in less the three months and the fourth in the last 15 months at the apartment complex, which has been condemned by the city. The complex has no water or electrical service because of the condemnation.

The cause of the Wednesday night fire was undetermined, Vicksburg Fire Chief Charles Atkins said, adding a fire that occurred at the complex in March remains under investigation.

Atkins said city and county firefighters were called to the blaze about 8 p.m. Wednesday and arrived to find the two-story building fully involved. He said the department’s ladder truck and pumpers from stations 2, 6 and 9. Warren County fire coordinator Jerry Briggs said the Culkin and Bovina Volunteer Fire departments also responded.

“We had four trucks, two from each department,” Briggs said. “We had three tankers and a pumper.” He said the county firefighters covered on set of buildings while the city covered another set.

“We let that one burn and tried to protect the buildings surrounding it,” Atkins said. “That’s about all we could do.” He said the county tankers shuttled water from a fire hydrant on U.S. 61 North to the firefighters.

“The conditions weren’t ideal with the rain and the wind, but we managed to get it done,” Briggs said.

In February 2016, an eight-unit apartment building was destroyed by fire. A Nov. 4 fire heavily damaged a second building in the complex and a March 28 fire destroyed another building.

City officials in early 2016 condemned the apartment complex, after the apartment owners failed to pay its water bill. In December, the property was put under the city’s slum clearance ordinance, requiring property owner Whispering Woods Holdings LLC, a Delaware-based holding company with offices in Florida, to prepare a plan to either demolish or rehabilitate the apartment complex.