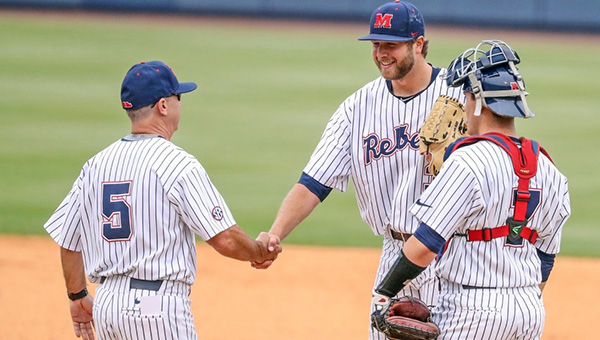 Ole Miss coach Mike Bianco (5) shakes the hand of pitcher Sean Johnson during a mound visit in Wednesday’s game against Louisiana-Monroe. Johnson carried a no-hitter into the seventh inning and led the Rebels to a 5-3 victory. (Joshua McCoy/Ole Miss Athletics)

OXFORD — The day after beating Louisiana-Monroe with their hitting, the Ole Miss Rebels did it with pitching.

Johnson, a one-time weekend starter who has battled injuries since transferring from Iowa Western Community College, left the game after allowing a leadoff hit in the seventh.

Johnson (1-0) had thrown just 7 2/3 innings this season after suffering a hand injury this spring and undergoing Tommy John surgery in 2015. Wednesday’s outing tied a career long. He threw 83 pitches and left after giving up Spencer Hemphill’s single in the seventh.

Johnson walked three and had a career-best six strikeouts.

“It’s easy to sleep on a team when you beat them so bad the night before,” Johnson said. “We get through so many innings and you start seeing they’re putting up some zeros, you’ve just got to lock in and say, ‘I can’t let them score. We’ve got to score first.’ … I don’t really see myself as a starter anymore with the way my arm comes back after throwing so many pitches in one outing, but it just felt good to be out there to be honest.”

Ole Miss (29-17) completed the two-game sweep after winning Tuesday’s seven-inning game 21-7. The Rebels are back on the road at Florida this weekend for a big Southeastern Conference series.

Ole Miss sits at No. 35 in the latest RPI rankings — close to the bubble for an at-large NCAA Tournament berth — and could certainly use a series victory over the seventh-ranked Gators to shore up that standing.

“Today and yesterday was a big confidence booster,” said Ole Miss third baseman Colby Bortles, who broke a scoreless tie with a two-run homer in the bottom of the sixth. “I think we have all the confidence in the world in our team and the success we’re having.”

While Johnson was hanging zeroes on the scoreboard, so was ULM starter Stephen Morrison for the first five innings.

The Rebels got to Morrison and reliever Keegan Curtis with four runs on six hits in the sixth inning. Bortles had a two-run home run, and Cole Zabowski had an RBI single.

Nick Fortes, playing catcher instead of first base, had a solo home run in the seventh, his third of the series.
Given the lead, the Rebels’ bullpen wasn’t as good as their starter.

Brady Feigl allowed an inherited runner and his own to score when Tyler Cox put ULM (12-34) on the board with a home run in the seventh.

Will Ethridge gave up three hits and a run in the eighth. Dallas Woolfolk pitched the ninth to earn his 10th save, allowing a hit and a walk in the process.

The game ended when the third baseman Bortles made a diving stab to his left and made the throw to first. Woolfolk also got a double play ball after giving up a leadoff walk.

“Yeah, we all want it to be 1-2-3 and we want it to be easy, and there’s a lot of games where it’s pretty clean,” Ole Miss coach Mike Bianco said. “But there’s times where you’re challenged. Certainly Ethridge was challenged and Dallas, and the good news is they can usually handle the blows of the other team and the adversity sometimes that the game gives you.”

Vikings off to rough start at state golf tournament