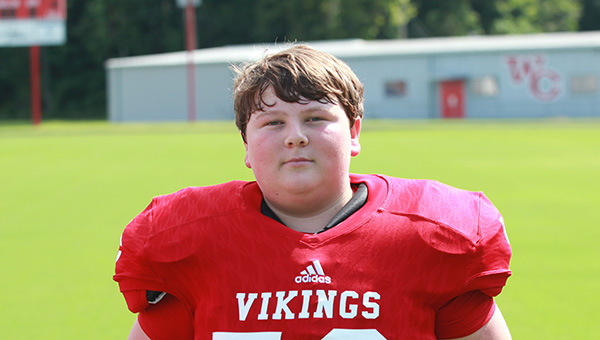 Warren Central golfer Taylor Lampkin shot a 95 in the first round of the MHSAA Class 6A tournament Wednesday in Tupelo. The Vikings were in last place among 16 teams heading into Thursday’s final round.

Vikings off to rough start at state golf tournament

TUPELO — Warren Central’s boys golf team accomplished its season-long goal of reaching the Class 6A state tournament, but had a brutally tough day once it got there.

None of the Vikings’ four golfers broke 90 in the first round Wednesday, leaving them in last place among 16 teams heading into the final round at Tupelo Country Club. The Vikings had a team score of 383, a distant 85 shots behind first-place Tupelo and 23 behind the next-closest team Clinton.

Tournament host Tupelo was in first place with a score of 298, and Madison Central was at 300. Desoto Central was in third at 313, and Starkville (324) and Olive Branch (325) rounded out the top five.

“We know the greens better than the other teams do,” Tupelo’s Walker Clayton told the Tupelo Daily Jounral. “We know which way the ball will break.”

Tupelo, Madison Central and Desoto Central accounted for 12 of the 18 golfers who shot under 80. All four of the members of each team broke that mark.

Madison Central’s Brice Wilkinson led a crowded race for the individual title after carding a 71. He took a one-shot lead over Clayton and his Tupelo teammate Brookes Hudson into the final round.

Madison Central’s Benjamin Nelson and Starkville’s Brooks Jenkins were another shot back at 74, and Gulfport’s Matt Hendrickson shot a 75. Four players shot 77, and five shot 78.

It had to be done, even if it didn’t make sense

I finally feel like an official Vicksburgian (is that the right term?). Last weekend, I took the plunge and experienced... read more