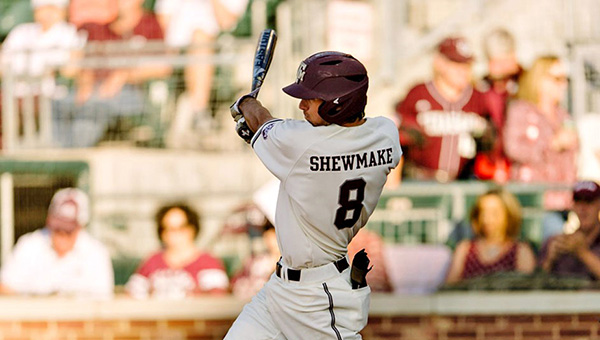 Braden Shewmake hit a grand slam in the fourth inning, and Nick Choruby had a pair of RBI singles as Texas A&M beat the Bulldogs 9-2 in their series opener Thursday night.

It was the third consecutive loss for Mississippi State (30-17, 14-8 SEC), and the first time it has lost the opening game in a conference series since April 7. It’s also just the second time this season that the Bulldogs have lost three games in a row.

“We didn’t play sharp early in the game,” Mississippi State coach Andy Cannizaro said. “We did battle but we didn’t execute well enough. We had chances and couldn’t get a bunt down. We had a tough night in a hostile environment.”

Shewmake had a lot to do with that.

With the Aggies (34-13, 14-8) leading 4-2 in the bottom of the fourth inning, the freshman second baseman pulled a fastball just inside the right field foul pole for a grand slam that blew the game open and made it 8-2.

“It’s always nice to get one in a big game like that,” Shewmake said. “You know Brigham’s (Hill) up there, pitching his guts out so we’ve got to stay behind him and keep trying to score runs for him so anytime we can get a run on the board is huge.”

Texas A&M added another run in the seventh inning on an RBI single by Choruby, and pitcher Brigham Hill kept the Bulldogs in check all night.

Hill (7-3) allowed two runs and seven hits in seven innings of work. He didn’t walk a batter and struck out six.
Mississippi State got both of its runs in the fourth inning — Cody Brown and Elijah MacNamee each had an RBI single — and then only had one hit and didn’t get a runner past second base after that.

“Brigham did a great job getting out of the fourth, because we could’ve given away the lead real quick right there,” Texas A&M coach Rob Childress said. “(We) came right back and scored five and were able to pull away from them and from the fourth inning on, Brigham was fabulous.”

Mississippi State starter Konnor Pilkington (5-4) was not as fabulous. He gave up seven runs in 3 1/3 innings, on five hits and four walks. He left the game after walking Baine Schoenvogel with the bases loaded, which put the Aggies in front 4-2.

Peyton Plumlee gave up the grand slam to Shewmake, but the three runners on base were all charged to Pilkington.

“We had (Pilkington) on his heels. We had a lot of good at-bats and he was never able to establish his secondary stuff,” Childress said.

The Aggies’ leadoff hitter Choruby finished 3-for-4 with two RBIs and a run scored for the Aggies, but it was the bottom of the order that did most of the damage or at least set the table.

The Nos. 6-9 batters in the lineup had six of the team’s 11 hits, scored six runs and drove in two. No. 9 hitter Walker Pennington hit a two-run double in the second inning, while Joel Davis and Cole Bedford each had two hits and scored two runs.

Game two of the three-game series is Friday at 6:30 p.m. Mississippi State will try to avoid losing its second consecutive SEC series, after it had won five in a row.

Texas A&M is trying to win its fifth straight SEC series. Thursday’s victory ran its winning streak to six games overall, and it has won 10 of its last 11 conference games.

“It’s always nice anytime you win a game to open a series. The first game is always big as far as setting up the weekend. So it was great for us to come out ready to go and play like we can play,” Choruby said. “Anytime you play well, it’s always good for your confidence. But you’ve got to come out the next day ready to go, no matter what. The previous day, whether you win or lose, doesn’t get you anything for the next day.”

WC better in Round 2 of 6A golf tournament