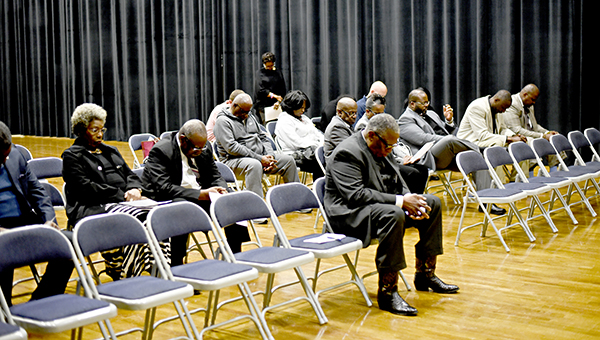 Attendees bow their heads in prayer during the National Day of Prayer Services held at the Vicksburg City Auditorium Thursday. The Day of prayer featured multiple prayer sites around the city and a special evening site at the auditorium where Mayor Flaggs declared May 4 as the day of prayer in Vicksburg (Courtland Wells/Vicksburg Post)

The Warren County community joined the country in celebrating the National Day of Prayer Thursday. Gathering were held throughout town from 12:15-12:45 p.m. as local participants joined countless others throughout the nation for a time of prayer.

Thursday evening , a non-denominational prayer service sponsored by the Mayor’s Faith Based Advisory Council was held at Vicksburg Auditorium. Local ministers prayed for families, the military, leaders at the local, state and national level, and unity during the hour-long service.

“This is one of the many programs that we are going to try to implement,” Willie Thomas who serves on the faith advisory council, said. “We want to make this something we do every year.”

“Heavenly father, thank you that you have given us the opportunity to come together as people who honor you,” Winters said during his prayer. “We humble our hearts to seek you today. We ask that your mighty presence will be in the midst of us.”

After a prayer for families, Bill Freeman, from Solid Rock Church, prayed for the nation and national leaders with a prayer centered around Mark 2:1-12. He was followed by Richard Johnson from Shady Grove who prayed for the military.

“Lord, I pray that our children and our grandchildren never have to step on the field of battle and never have to make the ultimate sacrifice,” Johnson said.

After a quick break, prayers were offered for city and county leaders, churches and ministers, school leaders and youth and their parents.

“Father I come to you on behalf of our churches and spiritual leaders,” Joe Mosely from Calvary Baptist Church said. “We thank you for every church door that is open with open arms and open hearts to receive people that are sick and lost. We pray this evening that you will bless every house in this city.”

Michelle Johnson, from Spirit Life Church, offered a prayer for unity before a moment of silent prayer and the benediction from Thomas closed the program.

The national theme for this year’s day of prayer was “For your great name’s sake, hear us, forgive us, heal us.” It was based off of Daniel 9:19.