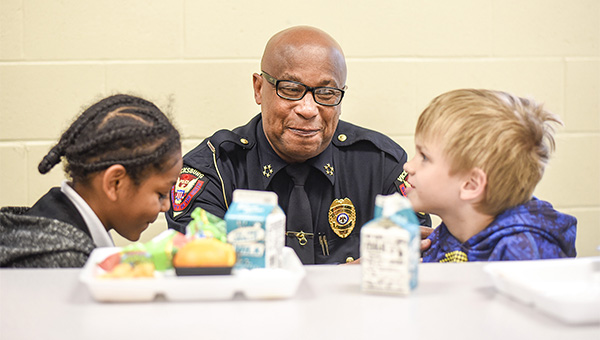 Vicksburg Police Chief Walter Armstrong and three officers walked from table to table during lunch at Dana Road Elementary Thursday. They stopped for quick chats, took photos, shook hands and showed off their handcuffs to the excited students.

The hour spent at Dana Road Thursday is part of a monthly outreach program called Little Blue Angels where Vicksburg Police officers go into schools to build relationships and interact with students.

“Once a month, we identify an elementary school and we go in and chat with the children while they are enjoying their lunches,” Armstrong said. “This gives them an opportunity to interact with the police.”

The goal of the program is to foster trust between young children and police officers in case they ever need help.

For some of the students, Thursday was their first chance to meet and interact with an officer. The quick interaction offered the chance to leave  a positive impression that could pay dividends down the road.

“I was pretty excited because I haven’t seen a police ever in my life,” kindergartner T.J. Henderson said. “I think that he’s pretty cool. I liked his handcuffs. They seem like nice guys.”

Officer Eric Paymon added, “This interaction with the kids at a young age is when we need to do it so as they grow they will know they can confide in a police officer for help. I think it is a great thing that we do it now instead of later.”

The older students also benefited because it showed them the personable side of officers and worked to combat the negative ideals they have come to believe.

“It is really nice because it shows that not all cops are bad and I know that some students in my class, they were prejudice against cops,” sixth grader Armando Hernandez said. “It helps show that cops can be nice and not always the enemy.”

The program has been in existence for two years, and Armstrong said it has had a positive impact on the department’s relationships with the community.

“It’s been very successful,” he said. “One of the things I’ve noticed over the years is that I have seen kids even when I am off duty and not even in uniform and they are able to call my name because of the relationship we have established with them.

“Kids are starting to know that we are here to protect them and get to know them and we are their friends.”

Little Blue Angels is only a small part of the Vicksburg Police Department’s ongoing efforts to build a positive relationship with the community. Armstrong said that he also encourages his officers to stop and talk to residents who they see out in their yards or sitting on their porches, and the original Blue Angels program serves as a monthly outreach program to senior citizens.