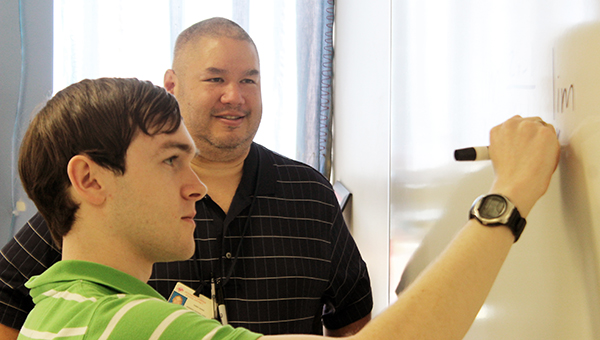 Warren Central senior Trevor Talbot was named the STAR student for the class of 2017. He was also honored as a National Merit Finalist. Talbot chose advanced math teacher Terry Wong as his STAR teacher.

A National Merit Finalist, Warren Central High School’s STAR Student for the class of 2017 and an ALL-STAR Scholastic Scholar, Trevor Talbot, has racked up an extensive list of accomplishments during his senior year.

Talbot was honored as one of 15,000 National Merit Finalists among all graduating seniors in the United States and one of 20 ALL-STAR Scholastic Scholars in Mississippi among the 284 STAR students.

“It is a great achievement and I’m honored,” Talbot said of being named STAR student. “I feel like I should strive to be the best I can especially academically and set an example for everyone else that they can achieve and do great things.”

He scored a 35 on the ACT, including a maximum composite score of 141 in the four subject areas, and held a 99.17 average in his core classes. His ACT score and achievements in the classroom distinguished him as an All-STAR Scholar. The All-STAR distinction included a $1,000 scholarship.

“I was surprised at first and I was excited,” Talbot said. “I felt really proud that I could be not just a STAR student, but also an All-STAR.”

“It was a good teambuilding,” Talbot said of robotics club. “I had to work in a team and accomplish an engineering goal.”

As part of being named STAR student, Talbot named advanced math teacher Terry Wong as his STAR Teacher for having the biggest impact on him as a student.

“Not only did he help me in [calculus], he really cares about students. Especially those he feels that care about themselves,” Talbot said. “Those who really care and want to succeed he will help them and give them advice. He pushed me to do certain things that helped me to grow and just talked with me and helped me figure out things.”

Wong teaches calculus and advanced algebra at WCHS. He had Talbot as a student during his junior year.

“He is a fabulous,” Wong said. “He is self-motivated. He is a good checks and balance person. There have been times where I’ve made careless mistakes or I’ve been outside the box and he’s done the research and very respectful in his approach said ‘Hey, Mr. Wong. I think there is an error here.’”

Talbot plans to attend Brigham Young University to pursue a degree in mechanical engineering with the goal of becoming an aerospace engineer.

“It is a group of people that share my beliefs,” Talbot said.

“It will help grow my faith instead of putting it under stress. It also is plenty academically rigorous.”

Depending on scholarships, Talbot plans to either delay his enrollment or take a break after his freshman year to complete a tour year missionary assignment for The Church of Jesus Christ of Latter-day Saints.

“It is a wonderful experience,” Talbot said. “It is an opportunity to learn and grow and serve others. You forget about yourself. You are focused on serving others.”

The students jumped and played going underwater with reckless abandon and no fear. Just days before that would have been... read more