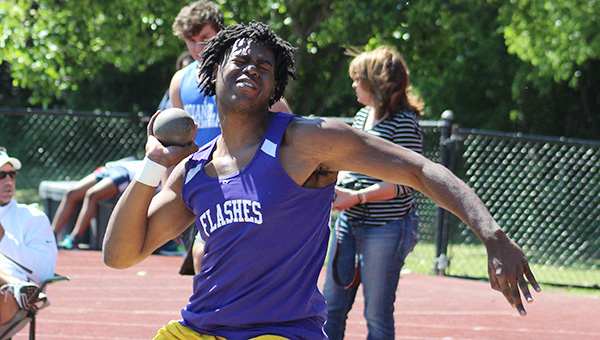 JACKSON — After his first few throws of the shot furrowed into the sand well short of his lofty expectations, a flash of doubt raced through Jaylen Whitaker’s mind.

This was his competition to lose, and maybe he was on the verge of doing so.

The St. Aloysius junior collected his thoughts and calmed his nerves between attempts. His throws got increasingly better until, on the last of his six attempts, he got what he’d been looking for all day — a long heave good enough to put away his doubts and opponents once and for all.

Whitaker’s last throw of 49 feet, 9 3/4 inches was a foot better than Garrett McManus’ best, and enough to win the MAIS Class AAA championship in the boys’ shot put Friday afternoon at Jackson Academy.

“It’s amazing. It was time to win it, and I won it,” Whitaker said. “It was a mental thing. I just had to get my mind right and say it’s time to win. That’s what champions do. They overcome adversity.”

Whitaker came up short of his goal of 51 feet and, for a long time, seemed as if he might not win at all. His first two throws were 43 and 44 feet, barely good enough to medal.

On his fourth and fifth attempts Whitaker improved to 47 feet — but so did McManus. The Silliman Institute thrower bettered Whitaker’s fourth attempt by a few inches seconds later, then made his 47-11 throw on his fifth attempt to keep the pressure on Whitaker.

“It was a neck-and-neck battle,” Whitaker said. “Coach (Michael) Fields told me it was going to be a battle all day. It’s one of those things you have to get used to.”

Down to his last throw, Whitaker at last came up with a winning attempt. McManus followed with his final throw, which was his best at 48-5 1/2 but well short of Whitaker’s mark, and at last the St. Al thrower could breathe easy.

“I was kind of nervous. I was worried that it was going to be a bad day. Worried that maybe I overpracticed yesterday,” Whitaker said. “When he threw 47-11, I knew it was time to go ahead and release it all. I felt it as soon as I stepped in the ring. It’s that confidence boost that I got.”

Whitaker’s state title helped St. Al get off to a good start at the two-day state meet. Preston McGowan finished fourth in the boys’ long jump and Antonio Thompson third in the discus to give the Flashes 21 points heading into the running events Saturday at Jackson Prep.

St. Al has 14 running entries and is the favorite to win about half of them. It trails Silliman (41 points), Centerville Academy (34) and Hartfield Academy (22) in the team standings.

“We got the runners 21 points going into tomorrow. Hopefully they can finish what we started,” Whitaker said.

St. Al only had one member of its girls’ team participating in Friday’s field events and managed to come away with a medal. Eighth-grader Natalie Burke finished third in the triple jump with a leap of 31 feet, 8 inches.

“Very happy,” Burke said with a smile. “I have to thank God. He’s the one that put me there, so I’m very grateful.”