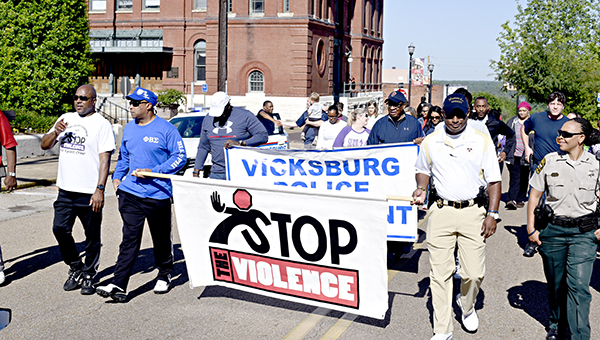 On May 25, 2014, Yolanda Boll became a victim of a crime when her daughter, Krystal Foster, 26, died from injuries she received when the van she was in collided with car driven by a drunk driver.

“People make choices that can hurt other people,” Boll told a group of about 30 people participating in the Walk Against Crime Saturday. “When you drink you should never drive; I told my kids, ‘If you want to drink do it at home. Invite your friends and party here.’

“I taught my children about making choices. Fortunately, they all made good choices.”

Foster was injured May 23, 2014, when a southbound Lincoln LS driven by Dakota West collided with the northbound Ford Aerostar van in which Foster was a passenger. She died two days later.

The wreck occurred near Washington and Bowman streets. West was found guilty of aggravated driving under the influence causing death or injury in Foster’s death during a September 2015 trial.

According to testimony at the trial, a blood alcohol sample taken three hours after the crash indicated his alcohol level was .15.

The legal blood alcohol limit for an adult to drive a noncommercial vehicle in Mississippi is .08.

Boll described the pain she has gone through since her daughter’s death.

“It never gets easier,” she said.

“My baby loved education. She was going to school to be a teacher, and she was a senior in college when she died. On her graduation, I walked across that stage and got her diploma,” she said, showing the framed diploma to the crowd. She said after the program that getting her daughter’s diploma “was the best day of my life.”

She said she didn’t hate West, adding “he made a bad choice.”

Boll was one of several speakers during the crime walk, which began on the steps of city hall and ended at the Warren County Courthouse.

“I want to commend the people who walked today,” Vicksburg Police Chief Walter Armstrong said. “It’s good to see people coming together as a community to believe and pray that we can have a safer community.”

Armstrong also urged people to call 911 whenever they saw suspicious activity in their neighborhoods, because police rely on residents to help them stop crime.

He also urged parents to be more aware of their children’s activities.

“Take responsibility for your loved ones,” he said. “We have 16-, 17-year-olds out there doing things that could lead to a criminal record or lead to their death. Know where your children are.”

Mayor George Flaggs Jr. said the city had a zero tolerance for crime.

“Everybody needs to be protected from crime … it is important we rid our community of crime,” he said.

North Ward Alderman Michael Mayfield urged residents to watch out for one another. “It takes all of us working together to stop crime,” he said.

While District Attorney Ricky Smith commended the walkers, he added, “There should be more people here standing for the victims.”

He said the criminal justice system has forgotten about crime victims and put more emphasis on the criminals.

“We need to stand up and do more for victims’ rights,” he said. “The criminal justice system should be for the victims, not the criminals.”