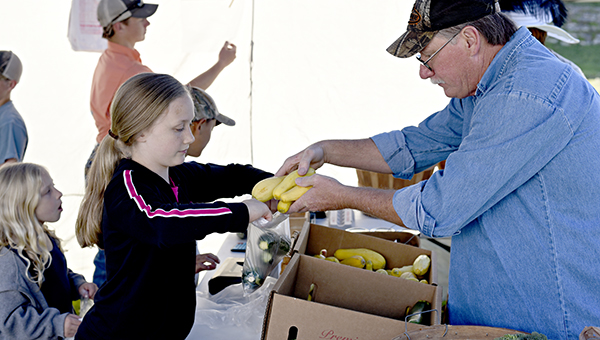 The shoppers were many and business was good as the spring Vicksburg Farmers’ Market opened for business Saturday at the corner of Washington and Jackson streets.

“This is a great kickoff,” market manager Sonny Hale said. “We’ve had a great turnout. The crowd was really big between 8 and 9 o’clock; I lost count after 250 (people). The people have really come through here.”

The first market of the season featured a variety of items from pastries, to pasta, vegetables and watermelon and tips from the county’s master gardeners on making a lasagna garden.

“This is my third year here,” said Connie Coleman of RC’s Honey Bees of Clinton, which was selling natural honey in different size containers. “My husband is the beekeeper; it’s one of the jobs he has. He works at Waterways (the U.S. Army Engineer Research and Development Center). He’s a computer software engineer.”

She said she enjoys coming to the market “because this is a great market as far as people and the weather is good —most of the time. It’s been a blessing for us.”

Two other third timers were Norma and Donald Kiazza of Vicksburg, who were doing a brisk business selling New Orleans-style shaved ice. The couple also sold coffee and iced coffee drinks, bread, muffins and other pastries and lemonade.

“It’s my wife’s high energy that brings us back,” Donald Kiazza said.

Daniel Moorehead of Beaver Dam Tomato from Ethel sold out of most of his produce by 10 a.m.

“I brought more than I usually bring because it was opening day,” he said. “I guess I’ll have to bring much more next week.” Moorehead is also in his third year as a vendor.

“This is a big market, that’s why we come here,” he said. “Also, I like to come to Vicksburg.”

While the vendors were selling their wares, the county’s master gardeners were providing information about making a lasagna garden, a garden Master Gardner Tom Skinner said requires no tilling or digging or weeding.

Building the garden, he said, involves making a base with cardboard or newspaper and adding layers of leaves, grass clippings, straw and compost material.

Once completed and in use, people can grow plants and vegetables in a setting with soil that is easy to work with, requires less fertilizer and no weeds.

The garden drew a lot of people to the master gardener tent looking for information. Other people walked about the grounds looking at the different items for sale.

“I just came to see what’s here,” said Terri Allen of Vicksburg. “This is very nice. I bought some lemon pepper pasta and some jalapeno pasta, and I got a frozen cappuccino. This was my first time. I love it. I’ll be back.”

“This is success,” Hale said. “This was a big day, and we did it without our high-end vendors, who weren’t quite ready to come. I’m not being critical, because we need them, too, but this was a great opening.”