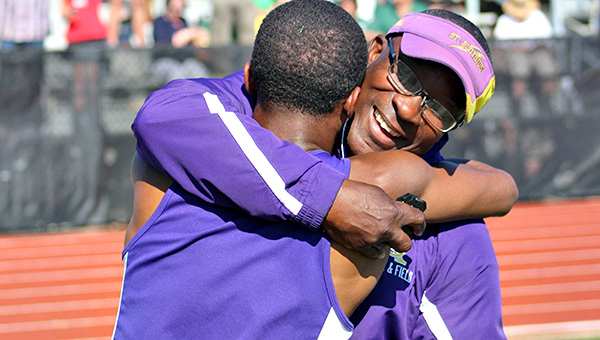 FLOWOOD — At the end of the 4×400 relay, the last event of his grueling day at the MAIS Class AAA state track meet, Donald Woodson limped his cramping, sore body back toward the middle of the infield while the last of his challengers straggled across the finish line.

A moment later, the St. Aloysius senior caught sight of his coach, Michael Fields, and broke into a wide grin. Woodson walked over and gave Fields a celebratory hug as all of the pain and fatigue washed away in the glory of a day for the ages. 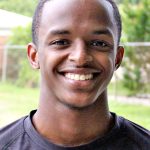 “It feels great. I’ve always wanted to be a part of a championship team. I went to state with the St. Aloysius football team, but we didn’t win it. The second time going to state in track, and actually winning it? No other thing can beat it.”

Woodson’s performance in his individual events was the driving force behind the Flashes’ success. His three gold medals gave the team 30 points and, had they not earned another point, would have been enough to put them in the top 10 of the team standings.

He won the 100 meters in 11.02 seconds, edging teammate Jamar Williams by less than a tenth of a second. Woodson then won gold in the 200 meters with a time of 21.80 seconds, and capped off his personal triple crown by running the 300 hurdles in 41.99 seconds.

Woodson said he was especially proud of his hurdles championship. He came up through the ranks as a sprinter, but was pressed into service when teammate and defending Class AAA champion Connor Bottin injured his knee and was lost for the season.

Woodson had never competed in the hurdles before this season and wound up being the best in the state.

“We had a person injured and it was a think quick situation where we need somebody in this event to have points. My coach thought I could do it. I didn’t think I could do it, but he thought I could. He put me in it,” Woodson said. “The first meet I came in first place and, honestly, it became one of my favorite races.”

While Woodson was busy putting together an impressive personal meet, it was in the relays where he and his teammates really made jaws drop.

The grand finale was the 4×400. Tyler Lewis stepped in for Thompson and teamed with the other three speedsters to win in 3:26.62 and obliterate by nearly three seconds the Class AAA record set by Centerville in 2016.

“It’s the best feeling in the world when you come out here and you do what you’ve been training to do. I want to thank Coach Fields, and my teammates that have been training hard with me. We made it happen,” said Williams, who also finished second in the 100 and 400 meters, and third in the 200.

The only thing that got beat worse than the record in the 4×400 was the second-place team from Centreville. It finished in a respectable 3:33.95, but its anchorman was 40 yards behind Woodson on the track. It was a fitting and symbolic end to the Flashes’ day of dominance.

“From day one me and my best friend Jamar asked our coach what’s the records for the 4×1, the 4×4 and the 4×2? Our relay team worked hard every practice to get this,” Woodson said. “It didn’t sink in until I had my next race. I was sitting there at the tent thinking me and my best friends actually did this.”

The team title was St. Al’s first as a member of the Mississippi Association of Independent Schools. Its first championship was in 2015, when it was still part of the Mississippi High School Activities Association. It finished third at the 2016 Class AAA meet in its first season as an MAIS member.

Whatever the initials on the trophy, two state championships and a third-place finish in three years, with different casts powering each one makes the Flashes a budding track and field dynasty — a prospect Fields did not shy away from.

“That’s the plan,” he said. “That’s what we’re working toward, and we’re not going to stop working.”